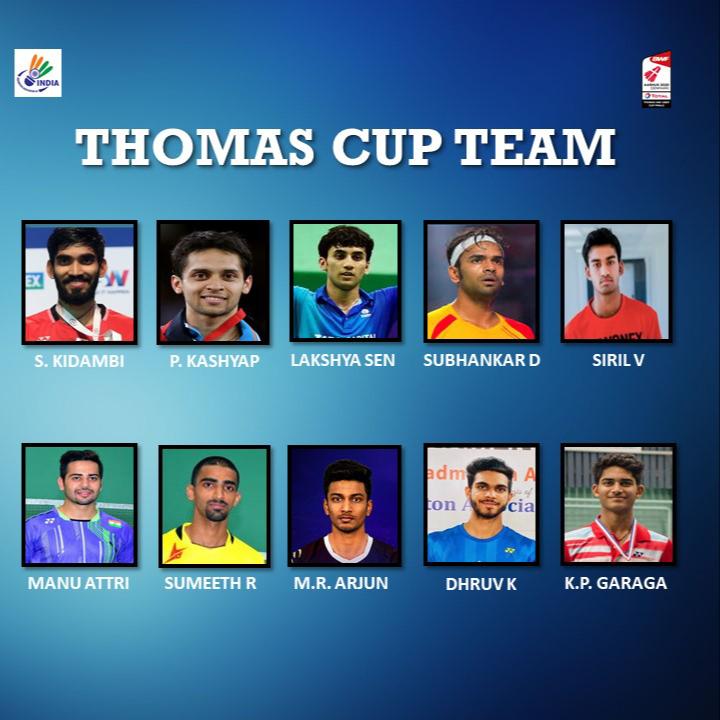 World Champion P V Sindhu and former World No 1 Kidambi Srikanth will lead a 20-strong Indian badminton squad for next month’s Thomas and Uber Cup Finals, the Badminton Association of India (BAI) said on Thursday. With World Championships bronze medallist B Sai Praneeth pulling out of the event due to knee injury, Srikanth alongwith 2014 Commonwealth Games champion Parupalli Kashyap and the in-form Lakshya Sen will take the onus of the singles events.

For the two doubles events, men’s pairing of Manu Attri and B Sumeeth Reddy and Dhruv Kapila and MR Arjun have been selected in the team along with Krishna Prasad Garaga. The women’s team for Uber Cup will be led by Sindhu, who made herself available for the tournament after initially deciding to give it a miss following a timely intervention by BAI president Himanta Biswa Sarma.

The squad will be further bolstered by the presence of former world no 1 Saina Nehwal and Commonwealth Games bronze medallists Ashwini Ponnappa and N Sikki Reddy, who will be helming the doubles department. Youngsters Aakarshi Kashyap and Malvika Bansod were also included in the 10-member squad. In Thomas Cup, India has been placed in Group C with the formidable 2016 champions Denmark apart from Germany and Algeria. In Uber Cup, India finds itself in Group D with the other teams being China, Germany and France. However, the 14-time champions China are yet to confirm their participation.

Sindhu, Saina, Srikanth, Laskhya and women’s doubles pair of Ashwini and Sikki will also participate in the two Super 750 events – Denmark Open (Oct 13-18) and Denmark Masters (Oct 20-25) which will he held after the Thomas and Uber Cup Finals. With September 18 being the cut-off date for sending entries for the prestigious biennial tournament, the six-member selection committee was earlier supposed to pick the team on September 17.

The Sports Authority of India had proposed a preparatory camp in Hyderabad which was originally scheduled to start on September 7 and conclude on September 27 for the event set for October 3 to 11 in Aarhus, Denmark. However, the camp was cancelled on Thursday after it became clear that players would not get any relaxation on the seven-day mandatory quarantine period and BAI then decided to announce the team.

“After a lot of deliberations and multi-label meetings with all stakeholders including Sports Authority of India, we have decided to cancel the camp,” BAI general secretary Ajay Singhania said. “With the SOP implemented and quarantine procedures followed, there will not be enough time to conduct a camp and hence it was a decision taken in consultation with the five selectors and the National Coach.”

With the camp cancelled, the governing body asked the selected players to keep training on their own and submit fitness certificate by September 17. “The selected players have been asked to submit fitness certificate by September 17 and players have been advised to train on their own and keep BAI updated on their regular fitness and training status,” BAI said. “Team departure will be intimated to the players in due course of time once everything is finalized.”