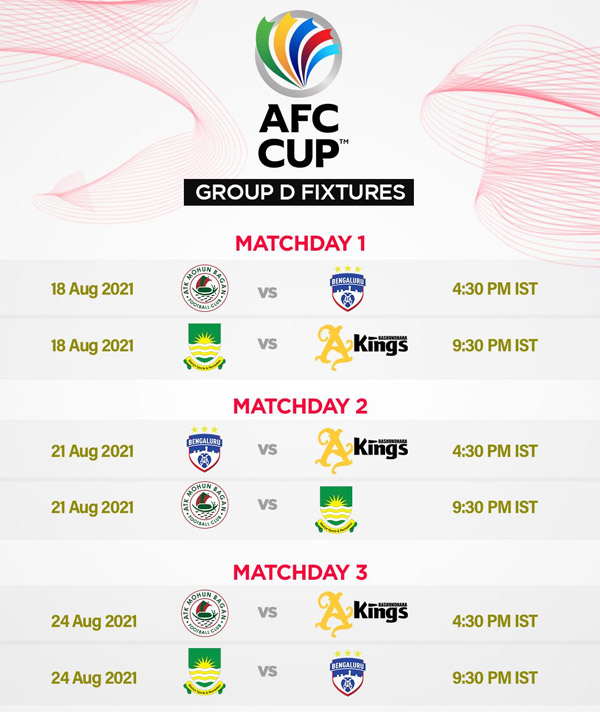 The Bengaluru FC have joined the Mariners in Group D…

The Group D (South Zone) matches will be held at the Maldives National Football Stadium in Male, Maldives, across three match days on August 18, 21 and 24  in a round-robin format, with the eventual group leaders advancing to the single-leg Inter-Zone Semi-Final.

When will ATK Mohun Bagan play in the 2021 AFC Cup group stage?

ATK Mohun Bagan got a direct berth in the group stage of second-tier Asian club competition with Mohun Bagan’s 2019-20 I-League title triumph, and following the merger between ATK and Mohun Bagan ahead of the last season wherein ATK Mohun Bagan plied their trade in the Indian Super League (ISL) as a new entity.

The Mariners are set to open their AFC Cup campaign against Indian rival side Bengaluru FC.

When are Bengaluru FC in action in the 2021 AFC Cup group stage?

Jayesh Rane’s 25th-minute strike in Bengaluru FC’s playoff tie against Club Eagles of Maldives have earned them a spot in Group D of the 2021 AFC Cup.

After a third-place finish in the 2019-20 ISL league stage handed them a place in the qualifiers of the competition, the Blues started off with a 5-0 win against Nepal Army back in April. Bengaluru now kick-off their group stage run with a clash against ATK Mohun Bagan

There is no telecast of the 2021 AFC Cup group stage games in India. However, we update live streaming link here on spotik.in

The club’s new signing in Finnish international Joni Kauko continues with his acclimatisation process in Kolkata. Sandesh Jhingan, too, has not travelled to the Maldives as get us close to joining Croatian top tier side HNK Sibenik.

Marco Pezzaiuoli handed full debuts to new signings Alan Costa, Sarthak Golui, Jayesh Rane and Rohit Kumar while the other two signings in Bengaluru FC’s 29-squad that travelled to the Maldives, Danish Farooq and Bidhyashagar Singh, got a few minutes off the bench.

Congolese forward Prince Ibara has been left out due to an infection, and with Edmund Lalrindika and Harmanpreet Singh nursing injuries, Ashique Kuruniyan also picked up a knock late into Sunday’s win over Club Eagles.

Four of the club’s youngsters from the developmental side are also part of the squad.