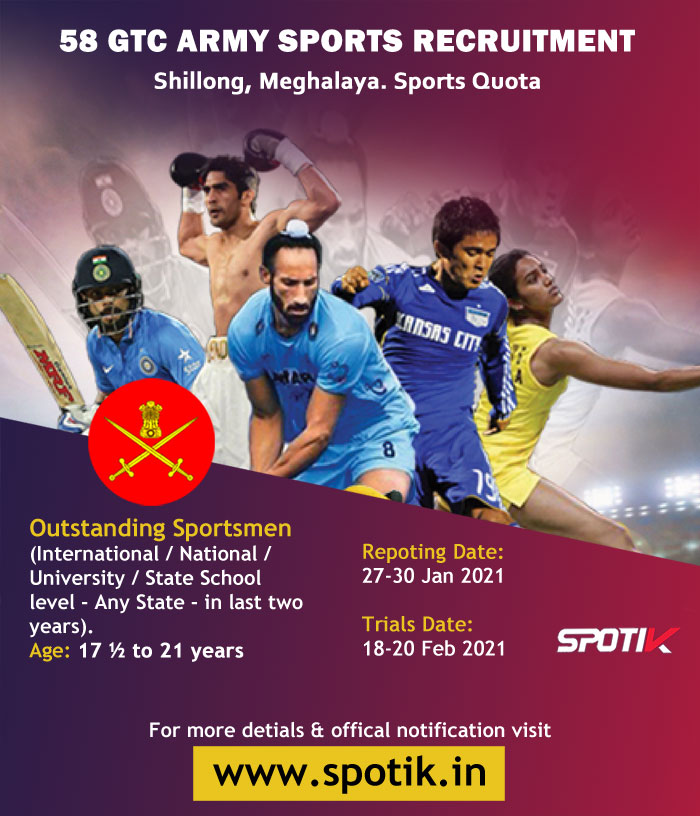 Sports Certificate : The sports certificate issued by authorized sports federation are valid for two years from issue dates as on the first day of the recruitment rally, for which the candidate is being screened . Sports certificate should be with registration number and from Government recognized sports institute bodies as per Appx B Sports candidates who are willing to enroll under sports quota will report to this Centre on 27-30 Jan 2021 along with sports certificate and medal.

Outstanding Sportsmen (National / State & those who represented District, College, School State/ University/ Board of Championship. Only National Federation and State Sports Association federation recognized by Ministry respectively issued certificates are valid. The validity period of sports certificate produced by the candidate will in last two years).

NOTE: Candidates who are traveling from other states please visit nearest Army Recruiting Office (ARO) to confirm the information and verify your sports certificate. For address visit www.joinindianarmy.nic.in

Documents Required at the Rally Site

Documents mentioned at Paragraph 1 to 11 above are required in original alongwith one photocopy of each document duly attested by Principal / Headmaster / Gazetted Rank Officer. Attested photocopy / printout of education certificate obtained from the Internet duly attested by the school Principal will be accepted at the Rally site for candidates whose original certificates have not been received from the concerned education board after declaration of the result or for candidates who have deposited their certificates in some other institute where they might be undergoing some professional course.

List of Games and Sports for Recruitment in the Army