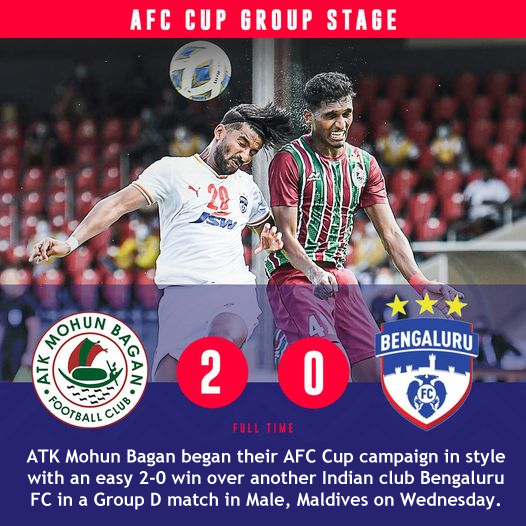 ATK Mohun Bagan displayed tremendous domination in their AFC Cup group stage opener as they got the better of their Indian counterparts – Bengaluru FC.

The game started pretty evenly until the Mariners started taking charge past the 30-minute mark. Hugo Boumous fitted in perfectly in Habas’ philosophy as he was allowed to play as the free-man in ATKMB’s attacking third. The ISL 2019-20 Player of the season carried his supreme form from the past season as he delivered when it mattered the most. He kept on knocking as he served many goal scoring chances into the box.

Boumous registered his first Goal contribution on his debut for ATK Mohun Bagan as his artistic corner routine was headed goalwards by Subhashish, and a deflection by Roy Krishna gave ATK Mohun Bagan their first goal at the AFC Cup. Set pieces? Look no further than Hugo Boumous!

Amrinder Singh and Hugo Boumous both the debutants looked in sublime form in the first half, contrary to what we saw at the Bengaluru FC defense. Although the Blues strung good passes together, they lacked the luster upfront. Both the teams headed back to the dressing rooms at halftime with only a single goal separating them.

Shortly after the game resumed, birthday boy- Subhashish Bose netted another goal for the Mariners which was long due. With this, Habas’ men got the upper hand with a robust 2-0 lead which they maintained throughout the game. On the other hand, reinforcements in the likes of Bidyashagar Singh and Danish Farooq pumped some much-needed boost in the BFC attack.

Coach Marco’s substitutions saw Bengaluru FC get close to scoring a goal, but the attackers failed to find the back of the net. Youngster Roshan Naorem put up a great shift to fill in Ashique’s void, and he was definitely a major positive for the losing side. Bidyashagar showed glimpses of what he can bring onto the table, and will sooner or later prove why he was famed as the Goal-scoring sensation in the I-league.

With the crucial 3 points in their kitty, ATK Mohun Bagan will play against home side Maziya on 21 August whereas Bengaluru FC will aim to keep their heads high and go for glory against the stern Bashundhara challenge later on the same day.