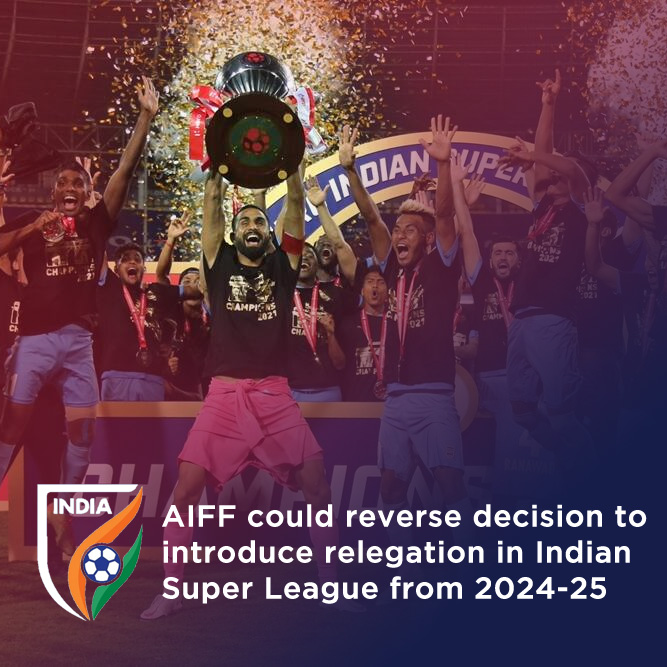 As per a roadmap agreed by all stakeholders and approved by the AFC, ISL was to have promotion-relegation system by 2025.

The All India Football Federation could reverse the decision to introduce relegation in the Indian Super League from the 2024-’25 season despite announcing a roadmap enabling it with the approval of the Asian Football Confederation and all the stakeholders, Sportstar reported.

“I think they (the league and club owners) are not happy with the proposal (relegation), so they might be pulling the AIFF to take a decision that there will not be a relegation from the ISL,” a football official was quoted as saying by Sportstar.

“Nobody will want to buy a team if there is a danger of the club being relegated. If someone buys a club for Rs 200 crore and if there is a risk of relegation in the same year, who will pay such a huge amount,” the official added.

In October 2019, the AIFF announced its new roadmap for Indian football that had the provision for the winners of the 2022-’23 and 2023-’24 I-League to be promoted into the ISL. ISL that was made the top tier of Indian football then was to have relegation from the 2024-’25 season onwards.

However, with doubts over ISL adopting relegation, it remains to be seen if the AIFF will allow a team from I-League to be promoted to the ISL.

The AIFF has called for an executive committee meeting with presidents and secretaries of all state associations where technical director Isac Doru is set to present the idea of no relegation from the ISL, according to Sportstar.

Roadmap announced by AIFF in 2019.