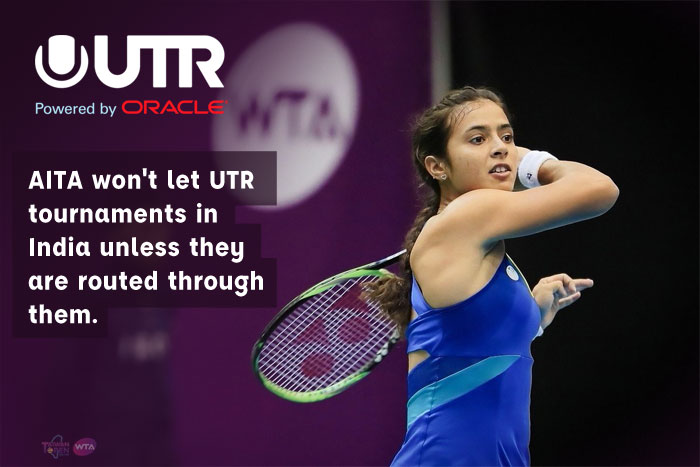 With the trend of conducting UTR tournaments by private academies picking up in India, the AITA has warned the tennis players and coaches to stay away from the unsanctioned events.

The governing body made it clear it won’t allow UTR tournaments to be held in India unless they are routed through them. Universal Tennis Rating (UTR) is an independent rating system where players’ previous 30 eligible match-scores from the last 12 months are taken into account for their rating on a scale of 1-16.

In the UTR system, not only the result is considered for awarding the rating but also the number of games won and lost apart from the level of competition (strength of opponent). Even a lost close match can help in improving the rating. There are 18 UTR tournaments lined up in different cities of India in October and November.

However, the All India Tennis Association (AITA), on October 3, communicated to state associations that they should convey to their own affiliated units that the national federation can de-recognise/de-register players, coaches, officials if they take part in UTR and similar non-sanctioned tournaments.

The organisers, however, are in no mood to listen to AITA.

“Even if they de-recognise us, how is their affiliation helping us? Has AITA supported us ever? They only take money from us as royalty when we organise tournaments. We have paid at least Rs one crore over the years as royalty to AITA,” fumed Jitendra Kumar Sharma, who runs Chamunda Tennis academy in Haryana.

“In the last eight months, when no tournaments were held, did AITA come forward to help the players or the coaches? So what’s the benefit of their affiliation,” he asked.

Launched in 2008 by Dave Howell and his two friends, UTR has now been adopted by the Intercollegiate Tennis Association — that governs college tennis in the USA — and several national federations.

A big motivation for private academies to host UTR tournaments is its affordability and the opportunity it gives the players to earn a seat in the much-coveted US colleges that now use UTR to make a selection decision.

A player can apply for a UTR for free, though, initially it was chargeable.

The AITA charges the organisers a royalty fee of Rs 15,000 per week for a Talent Series (TS) tournament and it goes up to Rs 20,000 if its a National Series (NS). For the men’s and women’s events, the royalty fee is 15 per cent of the total prize money of the tournament.

In comparison, UTR charges a fee of USD 100 (roughly Rs 7000) for one month or four weeks of tournaments.

A few believe that UTR tournaments are more beneficial for juniors since they let a player compete in at least 3-4 matches against the players of similar ability in one event.

In the AITA circuit, on the other hand, if a player loses to a strong seeded rival in the first round, he is out of the competition.

“If a player has gone all the way from Delhi to Kolkata for an AITA event and loses the first round, all the cost of travel and stay goes in the drain but UTR is played on Round Robin format, so you are assured of making a comeback, if you play well,” reasoned Vikramjit Singh, who runs ACE Tennis Academy in Punjab.

ITF advisory on players’ progress path states that a player in the age-group of 11-12 should play at least 50 singles and 30 doubles matches in a year in regional and national tournaments and the number is 70 singles and 35 doubles in the age group of 13-15.

Half of the players in a draw of 32, lose the first round and it means most of them would not get to play 50 matches in a year as ITF suggests.

So do the coaches want UTR to be an alternative to the AITA circuit?

“No, we are not saying that. All we are saying is that let both continue. Why are they threatening us? One of my players who recently registered on UTR, has got three offers from US colleges. He is the son of a mechanic. Has the AITA circuit given him this opportunity? It’s a life changing for him,” said Vikramjit.

“They have approached us and we will have a meeting with the UTR chairman soon. We are not aware of their system. If it is beneficial for players, fine but let AITA be a partner,” he said.