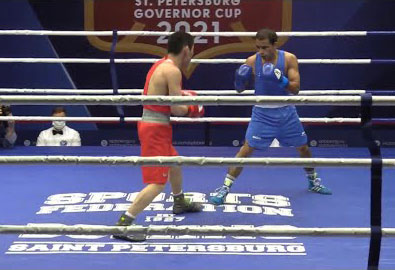 The world No. 1 in the 52kg beat local boxer Tamir Galanov by a unanimous verdict. Manish Kaushik, however, went down 5-0 in his opening bout later in the day.

Indian boxer Amit Panghal advanced to the second round of the 52kg category at the Governor’s Cup boxing tournament in St. Petersburg, Russia on Wednesday.

Tamir Galanov was a bronze-medallist at the 2017 Amateur World Championships and a four-time Russian flyweight champion.

In the opening round, Amit Panghal put up a defensive front and evaded the Russian’s punches with ease. The Indian, however, went on the attack in the second round, first with a series of lefts and rights and then landing occasional blows with his sharp jabs.

One such jab led to a cut on Galanov’s nose with the bout halted momentarily for the Russian to be treated.

The fight got intense in the third round, with both attacking from close range. Amit, in particular, was particularly aggressive, as his frequency of punches increased pushing the Russian frequently on the backfoot.

Galanov resorted to the combinations towards the end but found Amit countering, with the Indian’s punches more measured and connecting well. The Indian, world No. 1 in the 52kg, won 5-0.

This was Amit Panghal’s first tournament since the Boxam meet last month, where he exited in the quarter-finals to European Games champion Gabriel Escobar of Spain.

Meanwhile, Manish Kaushik bowed out of the Governor’s Cup after falling 5-0 to another Russian boxer Gabil Mamedov in the first round of the 63kg.

Manish Kaushik has already earned a berth for the Tokyo Olympics, and overcame a severe injury during the COVID-19-enforced break last year to be fit in time for the Games.

Mamedov was the more aggressive of the two in the first round and though Manish Kaushik attempted to counter, he was forced to defend against Mamedov’s persistent attacks.

The Indian boxer noticeably came out with more intent in the second round, with some quick footwork and tried to land a few right hooks, which were unsuccessful. Mamedov weathered the early storm and hit back soon with a few jabs to gain the upper hand and keep Manish in check.

The third round was more evenly fought but Mamedov edged ahead after he cornered Manish Kaushik a few times and rounded off with a series of combinations towards the end to progress.