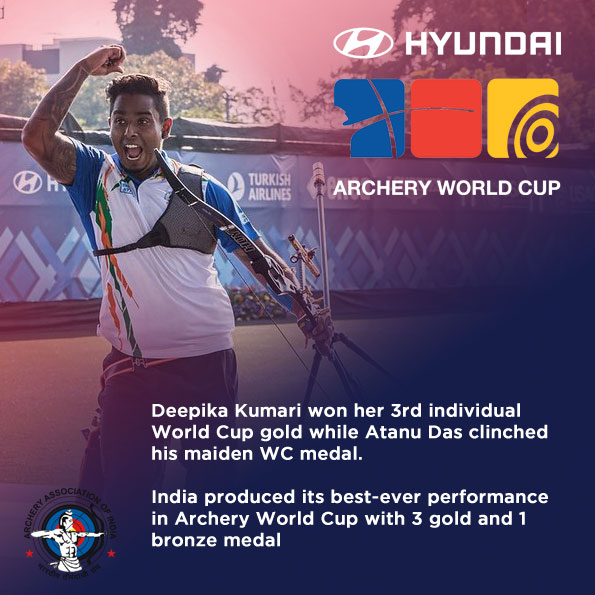 “We travel together, train together, compete together and win together. She knows what I like, and I know what she likes,” Das, who married Deepika after a 2-year courtship, said.

This was India’s recurve archers’ best ever World Cup finish with two individual and one team gold medal in their return to the top International calendar year event after almost two years.

Also, this was India’s best-ever individual recurve men’s result since Jayanta Talukdar triumphed in Croatia way back in 2009.

“It’s been a long time since I shot in the finals, she said. It feels great and, at the same time, I’m happy and nervous. It gives me confidence and pushes me to give better performances,” Deepika said.

India started off with the women’s team of Deepika, Ankita Bhakat and Komalika Bari winning a first team gold after seven years when they scripted a stunning turnaround to down fancied Mexico 5-4 (27-26) in an intriguing shoot-off.

The performance rubbed off on the mixed pair duo of Das and Ankita Bhakat as they bagged a mixed pair bronze, upsetting top seed USA 6-2 with yet another fightback at the Sports Complex Los Arcos here.

But the real icing on the cake came in the individual events later in the day when country’s top archery couple ‘Dee-Das’ bagged two individual golds in their respective events.