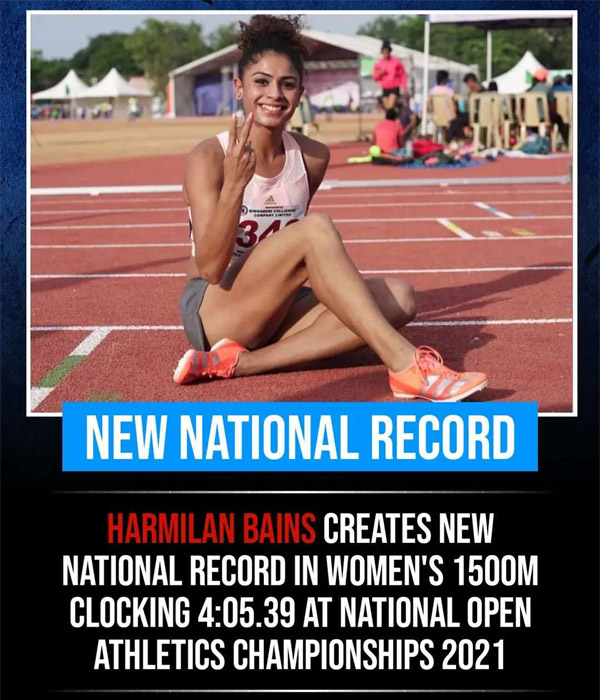 Delhi’s KM Chanda (4:18.24) shadowed Bains until the Punjab runner sped away at the bell to win by a sizable margin.

Undefeated in eight national-level races since January 2020, Bains has shown rapid progress, improving from 4:14.68 in the Khelo India University Games in Bhubaneshwar last year to 4:08.70 and 4:08.27 in the Federation Cup (March 16) and Indian Grand Prix 4 (June 21) respectively in Patiala.

On Thursday, she capped it off with a National mark.

Taranjeet also grabbed the limelight winning the 100m with a personal best time of 11.50, two years after she was knocked down by a car and broke a collar bone.

Taranjeet knocked two-tenths of a second from her previous best of 11.70 clocked in winning the Federation Cup Junior (U20) title in Bhopal on January 25 this year.

Naresh Kumar won the men’s sprint in 10.30 seconds, the second fastest time by an Indian in 100m this year behind Gurindervir Singh’s 10.27 seconds in Patiala on June 26. It also gave the 23-year-old from Guntur a place among the five fastest sprinters in Indian history, handing him the Meet Record, bettering Anil Kumar’s 10.37 seconds set in 2001.

The race produced personal bests for Assam’s Amlan Borgohain and Harjit Singh (Services) with times of 10.34 seconds for both, a photo finish separating them by six-thousandths of a second to secure the silver medal for the former. To their credit, the trio was able to script great runs despite a couple of false starts by Services’ KS Pranav and Satnam Singh.

Yaman Deep Sharma (Rajasthan) emerged the best all-rounder with a 55-point victory over Usaid Khan (Services), riding on his 182-point lead earned on the first day on Wednesday through long jump, high jump and 400m.

Asian Games gold medal winning heptathlete Swapna Barman (Railways) won the women’s high jump, while Sahil Silwal (Haryana) showed that he could be the javelin thrower to watch in the future as he won the men’s event with a final throw of 77.79m that saw him catapult from the fourth spot to the top of the podium.