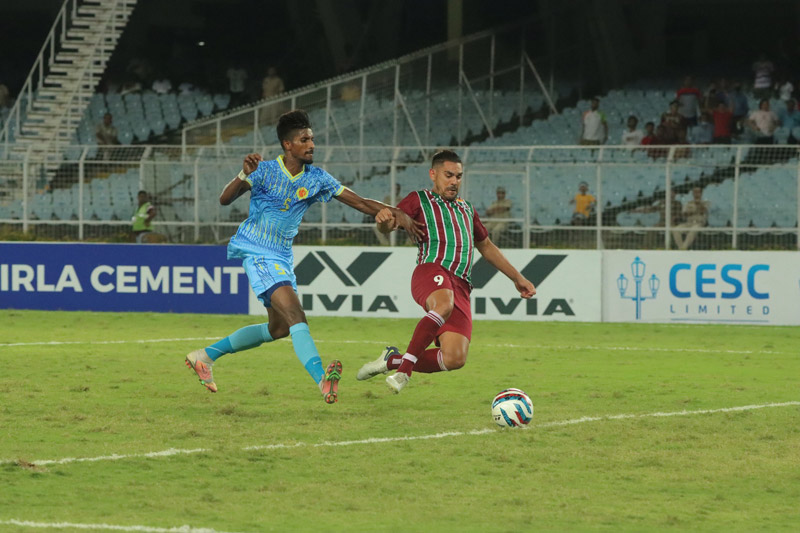 ATK Mohun Bagan edged past Abahani Limited Dhaka with a 3-1 victory at the Salt Lake Stadium in the AFC Cup. This result takes the Kolkata-based outfit into the group stages of the cup competition.

A David Williams (6’,29’,85’) masterclass in finishing ended all hopes for the Dhaka-based side to progress further in the tournament, who got a consolation goal through Daniel Colindres (61’).

ATK Mohun Bagan started the match brilliantly and scored within the first 10 minutes of the game. David Williams scored with ATKMB’s first attempt at the goal. A beautiful cross by Joni Kauko was converted by the Australian to put the Mariners in the lead.

Juan Ferrando’s men continued to dominate the game after scoring the goal.

In the 20th minute, Joni Kauko found himself at the end of a cross by Prabir Das, but his shot went over the crossbar.

Nine minutes later, Prabir Das put in a delicious pass to David Williams, who finished the chance and doubled the lead for his team. He had an opportunity to score a hattrick within the first half when he found himself through on goal but his shot was saved by Shahidul Alam and he kept the score at 2-0.

Dhaka Abahni had a chance to make a come-back in the game from a free-kick. But the players failed to connect with the ball and it went out for a goal kick. They started to create chances as the first half came to an end, but they failed to take them.

The first half concluded with ATKMB in a comfortable lead in the game.

The second half began in a fiery fashion with end-to-end action. However, both teams failed to convert any chances that they created.

In the 61st minute, Daniel Colindres scored a great goal from outside the box to get Abahani Limited Dhaka back in the match. Minutes later, Liston Colaco tried to replicate Daniel Colindres’s strike but his shot was tipped over the bar by  Shahidul Alam.

Mario Lemos’s men had a great chance to equalize the scoreline in the 67th minute, but Juwel Rana’s shot went wide of the target. The Dhaka-based outfit peppered the ATKMB defense with constant attacks in the second half.

In the 79th minute, Liston Colaco dribbled the ball into the box and squared the ball into Joni Kauko’s path but the pass was overhit and Kauko was unable to connect cleanly with the ball. Moments later, Kiyan Nassiri Giri produced a bit of magic and dribbled his way into the box, but his shot went off target.

However, in the 85th minute David Williams found himself through on goal and this time, he converted the opportunity and sealed the victory in ATK Mohun Bagan’s favour.

That brought an end to the action of this game. The result meant that Juan Ferrando’s men reached the group stages of the AFC Cup.