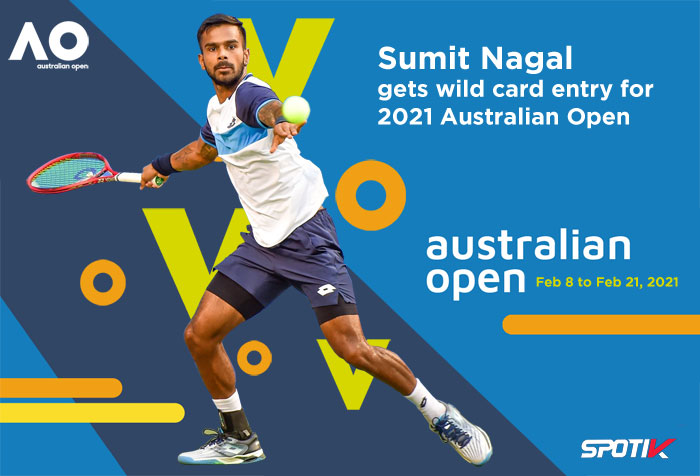 Indian tennis player Sumit Nagal has been given a singles wildcard entry for the first Grand Slam of 2021 – the Australian Open in Melbourne.

The 23-year-old, along with Wang Xiyu of China, will be in the main draw as both players became recipients of the tournament’s Asia-Pacific wildcards.

“I am very thankful to all the people who put effort in helping me get a wild card for the 2021 Australian Open. Thanks to Tennis Australia for all their effort to make this slam possible in these circumstances,” Nagal

Nagal made his Grand Slam debut as a qualifier at the US Open last year. He had grabbed headlines then for taking the first set off 20-time Grand Slam champion Roger Federer in their first-round match at Flushing Meadows.

Since then, Nagal has climbed through the ranks steadily and is the top-ranked Indian at the moment.

At this year’s US Open, he was the last man to receive direct entry into the field of 128. He became the first Indian since Somdev Devvarman (2013 US Open) to win a match in the main draw of a Grand Slam, when he reached the second round by defeating USA’s Bradley Klahn 6-1, 6-3, 3-6, 6-1.

Nagal was then knocked out of the first round of qualifying for the 2020 French Open.

Meanwhile, former world No 1 Andy Murray has also received a wildcard for the 2021 Australian Open.

“We welcome Andy back to Melbourne with open arms. As a five-time finalist he has been an integral part of so many amazing matches and storylines in the recent history of the Australian Open,” said Australian Open Tournament Director Craig Tiley in an official statement.

“His retirement was an emotional moment and seeing him come back, having undergone major surgery and built himself back up to get onto the tour again, will be a highlight of AO 2021,” he added.

The start of the 2021 Australian Open has been pushed ahead by three weeks – from January to February 8.