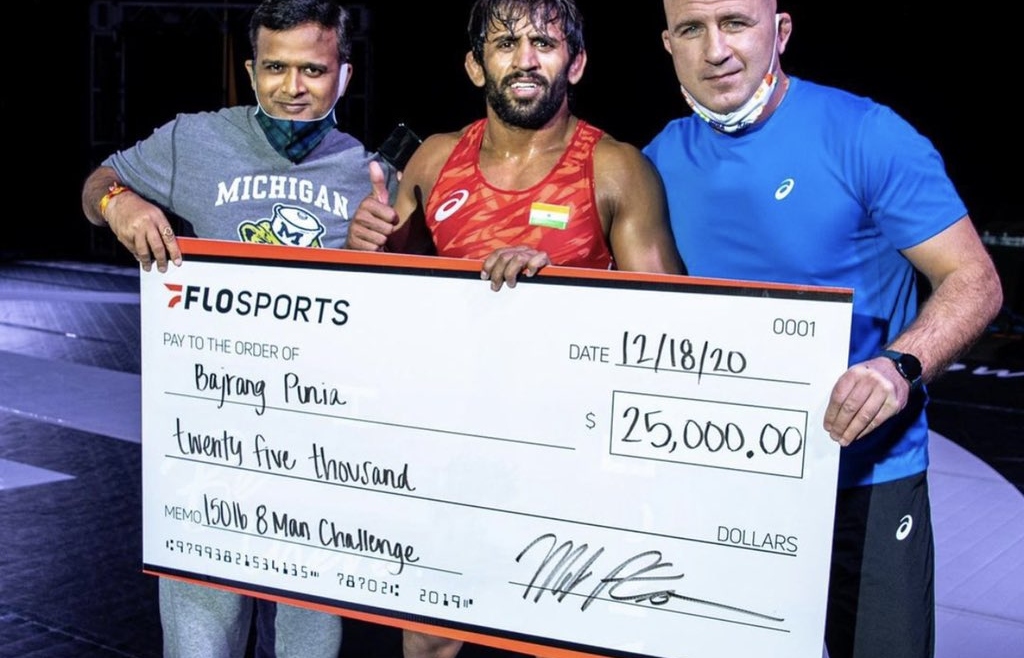 The first period ended with a 4-4 tie. Punia scored first on an exposure, then Green followed with a leg attack takedown to tie it at 2-2. Green scored quickly after, on an explosive double leg to lead 4-2. However, Punia spun behind Green with just five seconds left in the period to knot it at 4-4.

In the second period, it was Punia who struck quickly on a spin-behind takedown just 15 seconds after the whistle for a 6-4 lead. In par terre, Punia was able to turn Green to extend it to 8-4. Green was unable to score the rest of the way, getting some shots but not breaking Punia’s defense.

They came in as top two seeds, with Punia at No. 1 and Green at No. 2. Punia has competed at 65 kg in recent years, while Green has wrestled up at 70 kg. Punia has been training this month in the United States with the Cliff Keen WC in Michigan.

Punia reached the finals with a 6-1 quarterfinals win over Pat Lugo, and a 9-0 semifinal win over Anthony Ashnault. Green’s run to the finals included 10-0 technical fall over Bryce Meredith in the quarterfinals and a 4-2 win over Alec Pantaleo in the semifinals.

Third place went to Alec Pantaleo, who looked strong in an 8-1 victory over Anthony Ashnault. Pantaleo, who starred at Michigan, had three takedowns and a turn, while Ashnault, an NCAA champ for Rutgers, only scored when Pantaleo was put on a shot clock and couldn’t score. Pantaleo was a late replacement for injured Joey McKenna in the tournament. Pantaleo secured $10,000 for third place, while Ashnault earned $5,000 for fourth place.

The quarterfinals featured two matches where the lower seed won their match. Ashnault, seeded No. 5, needed a late step out to tie up the match with No. 4 seed Evan Henderson, securing a 6-6 criteria win.

No. 6 seed Pantaleo also forced a step out with 11 seconds left to upset No. 3 seed Jordan Oliver, 4-4. Oliver had taken a 4-3 lead on a takedown with 59 seconds left in the match.

The four wrestlers who lost in the quarterfinals earned $1,000: Henderson, Oliver, Lugo and Meredith.

There were two women’s matches as part of the card, with Jacarra Winchester and Tiare Ikei securing wins. Click here for separate story about women’s bouts.

Green was put on the shot clock, and made an attack, which Punia blocked and secured a head pinch roll for two points. Green came back with two quick takedowns, the first on a single leg, and the second on a powerful double leg, where he lifted Punia high before taking him to the mat, giving him a 4-2 lead. However, Punia was able to spin behind Green for a takedown with just five seconds left in the period to knot it at 4-4.

Ashnault was placed on the shot clock and couldn’t score, giving Punia a 1-0 lead. Punia forced a step out to make it 2-0, and added another stepout on a double leg shot to make it 3-0 at the break.

In the second period, Punia got behind Ashnault and brought him back for a four-point takedown to lead 7-0. He sunk in a leg in par terre and got a nice turn to make it 9-0. Ashnault got a few leg attacks late, but Punia was able to defend them all.

In the first period early on, both wrestlers were warned for passivity, but Punia was the one placed on the shot clock first. Although Punia could not score during the 30-seconds, giving a point to Lugo, shortly after the time ran down, Punia scored a two-point counter passivity to take a 2-1 lead at the break.

In the second period, Punia was put on the shot clock again, but was able to score a takedown with just one second left, to take a 4-1 lead. Punia scored a slick two-point turn from the top, to make it 6-1. Lugo could not come back late in the match.