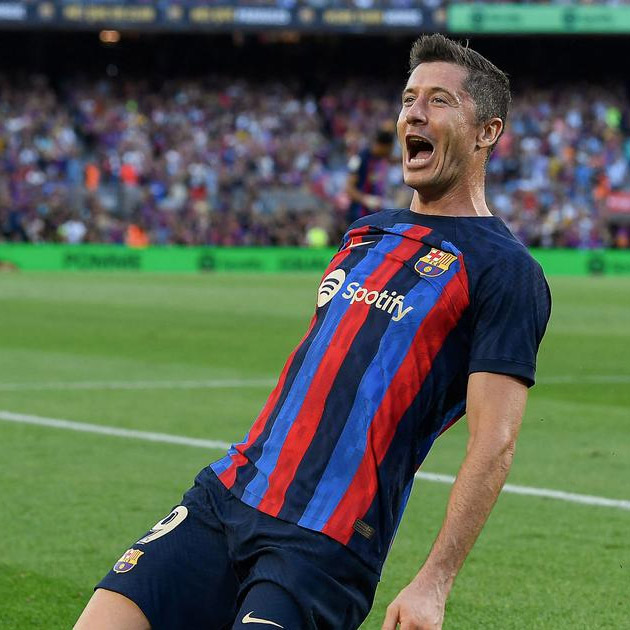 The Polish striker is the division’s top scorer but is suspended for three league games after being sent off in Barcelona’s final match before the World Cup.

Robert Lewandowski has taken La Liga by storm but Barcelona coach Xavi must cope without him during a busy January period, starting with a Catalan derby against Espanyol on Saturday.

The Polish striker is the division’s top scorer but is suspended for three league games after being sent off in Barcelona’s final match before the World Cup.

Despite being reduced to 10 men, Barcelona came from behind to beat Osasuna and move two points clear of champions Real Madrid, who are second after 14 games each.

Xavi has three options to pick from up front, with Ferran Torres, Ansu Fati and Memphis Depay vying for a start, although none of the three are natural centre forwards.

Meanwhile winger Ousmane Dembele, World Cup runner-up with France, returned to training with Barcelona on Monday and could be involved against Espanyol.

After Barca’s disappointing Champions League group stage elimination, moving top ahead of the World Cup was an important morale boost for the Catalans.

The coach is under pressure to win trophies in his second season at the helm after finishing the previous campaign trophyless.

Lewandowski’s arrival seemed to be paying instant dividends but after Barcelona were beaten twice by his former side Bayern Munich in Europe, pressure on them has risen.

“I am aware that we need to win titles this season,” Xavi told Barca TV last week.

“The pressure is mainly on me. And I accept it. I thrive on challenge and one needs to be brave.”

Barcelona’s first chance to lift silverware this season comes in mid-January with the Spanish Super Cup.

However they must face Espanyol and Atletico Madrid in La Liga before that, along with Intercity in the Copa del Rey.

Crosstown rivals Espanyol are fighting for survival at the other end of the table, 16th and only one point clear of the drop zone.

Coach Pablo Machin is likely to select Martin Braithwaite in attack against his former side, after a sour parting of ways last summer.

The Danish forward said he thought Xavi did not believe in him and has a chance to prove his point on Saturday.

Xavi preferred to rely on Torres, Fati and Depay as back-ups for Lewandowski instead of Braithwaite – so further scrutiny will fall on his derby line-up selection.