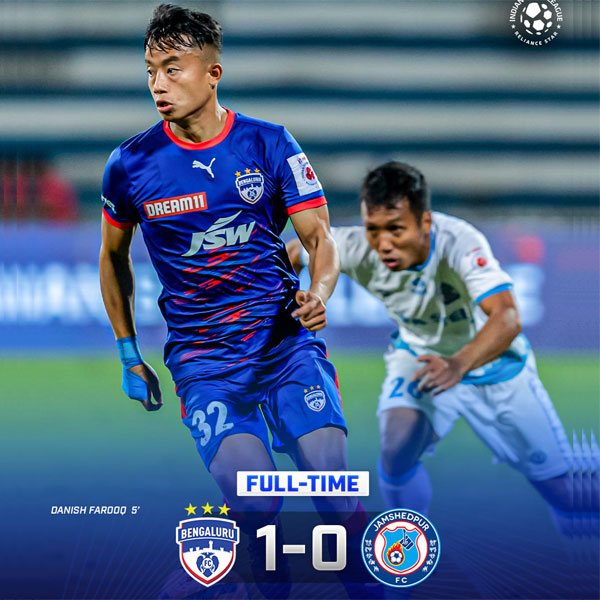 A fifth-minute Danish Farooq strike was enough to hand Bengaluru FC three vital points against Jamshedpur FC in the Hero Indian Super League (ISL) at the Sree Kanteerava Stadium in Bengaluru on Saturday. Opportunities came at both ends of the pitch as the Blues rattled the woodwork on a couple of occasions while the Red Miners couldn’t find success in the Bengaluru FC box.

The hosts made just a solitary change that saw Parag Shrivas coming in for Prabir Das. The visitors made three changes. The most significant of them was the forced one that saw Pratik Chaudhari coming in to replace the suspended Peter Hartley to face his former club. Germanpreet Singh was out of the squad again as Jitendra Singh came in to replace him. The other change in midfield saw Farukh Choudhary coming in for Ritwik Das.

The home crowd didn’t have to wait long for the first goal as Bengaluru FC got their noses in front five minutes into the game. Roy Krishna sprinted down the right flank before curling an early ball towards Farooq. The midfielder took a touch before dispatching it past the keeper at the near post from the edge of the box.

Five minutes after the opener, Krishna darted into the box and aimed for the far post with a low shot. However, the Fijian’s effort was deflected behind for a corner that led to nothing. In the 19th minute, Jay Thomas’ throw-in from the right flank found its way through to Ishan Pandita, whose sliced volley was pushed onto the upright by Gurpreet Singh Sandhu.

Minutes into the second half, Hernandez had a couple of opportunities. In the first one, his shot from the edge of the box lacked power and was saved by Yadav. Moments later, the Spaniard fired another attempt from a similar position, and on that occasion, only managed to find the post.

Five minutes past the hour-mark, Pandita was presented with two decent chances inside the box. Jitendra Singh whipped a promising ball in from the right flank. It was headed into the path of Pandita by substitute Daniel Chukwu before the striker fired it wide.

Harry Sawyer then went past Shrivas and played the ball into the box, where Pandita was completely unmarked. However, the 24-year-old’s attempt did not make the desired contact with the ball, summarising the evening for the Red Miners.