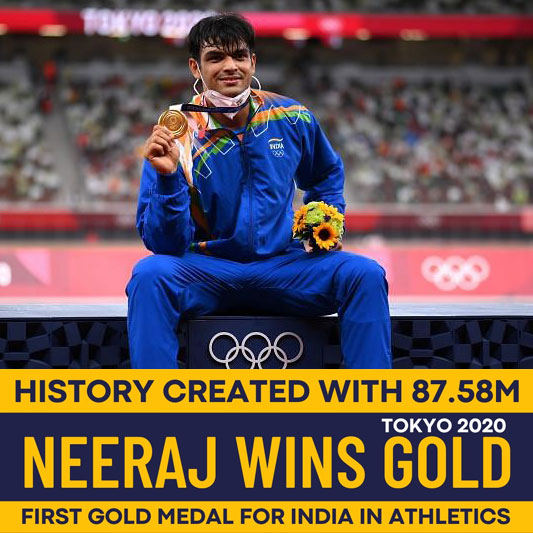 Neeraj Chopra created history when he claimed independent India’s first-ever Olympics gold medal in athletics when he won the javelin throw final at Tokyo 2020 on Saturday.

The 23-year-old Indian started off with a throw of 87.03 which immediately put him in pole position in the competition. He then followed it up with a throw of 87.58 to further consolidate his lead, a throw which proved to be decisive.

He is only the second Indian athlete, after Abhinav Bindra in 2008, to win an individual gold medal at the Olympics. This was India’s seventh medal in Tokyo, making it the best ever haul in the country’s history.

The silver medal was won by Jakub Vadlejch and Vitezslav Vesely made it two on the podium for the Czech Republic by claiming the bronze.

Chopra’s intent and energy were clear. This was an athlete who had his eyes firmly set on the gold medal and just as he had in the qualification round, he made his intentions clear early.

The third throw wasn’t a big one – 76.79 – but his medal hopes got a huge boost when Johannes Vetter, the overwhelming favourite, was knocked out of the competition at the halfway mark.

The big German started off with a throw of 82.52 but then slipped during his fouled second attempt. He seemed a little hurt and his third attempt was a foul too.

With Vetter out, Chopra became the man to beat. The order was reversed but as hard as the other throwers tried, they simply were unable to get close to Chopra’s best.

Chopra wasn’t able to get the same distance as his earlier throws but his second throw had done the trick.

He is the first athlete representing India to have won gold in javelin at the Commonwealth Games and the Asian Games, both in 2018. And now, he can add a big Olympic first to that list too.