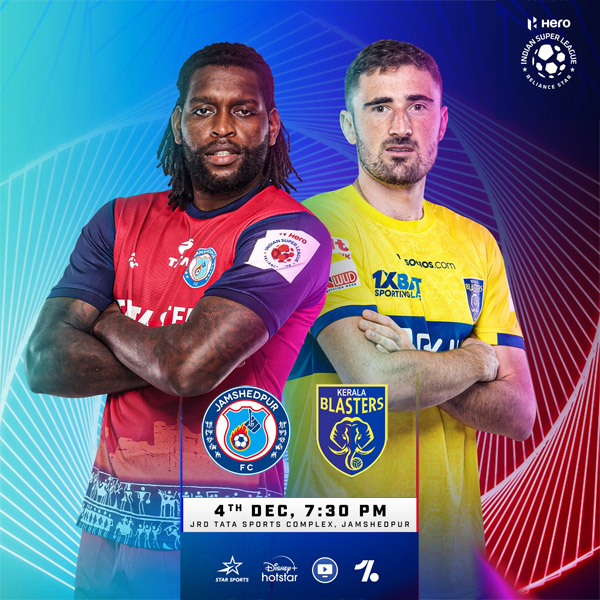 Jamshedpur FC will be eager to pocket maximum points in the next game, but standing in their way will be Kerala Blasters, who will be eyeing their fourth successive victory this season in the Hero Indian Super League (ISL) at the JRD Tata Sports Complex in Jamshedpur on Sunday. The Red Miners are on their worst Hero ISL run, as they have gone four games without winning a single point.

Sitting in tenth place at the moment, Jamshedpur FC have won just one game out of seven this season. Their only victory has come against the side that sits below them – Northeast United FC. In the last four games, the Red Miners have conceded ten goals and scored just two, picking up no points in the process.

In the last match, Jamshedpur FC trailed just two minutes into the game against East Bengal FC and went on to lose 3-1. Injuries may have disrupted proceedings at the club, but head coach Aidy Boothroyd mentioned after the game that he does not want to blame injuries or bad luck for the loss and focus on assessing his team’s performance to try and improve.

Boothroyd was without key midfielders Wellington Priori and Germanpreet Singh in the last game. Daniel Chukwu was fit to start and is likely to start against the Blasters, eyeing a goal that makes him the joint-highest goal scorer for Jamshedpur FC in the Hero ISL.

“Consistency is key. Getting rid of poor decision-making at key moments is another. The team needs to be mixed up a little bit, and we need to get back on track,” said Boothroyd. “We are scoring goals, but we need to keep clean sheets because that is going to be very important for us throughout the season,” he added.

After suffering three successive losses, Kerala Blasters FC bounced back with three wins on the trot, registering two clean sheets and gathering the perfect momentum for a tricky visit to the Furnace. The Blasters will be well-rested after their extended break last week and will be looking to replicate last season’s semi-final result against the Red Miners.

Dimitrios Diamantakos scored the only goal of the match when Kerala Blasters FC beat Hyderabad FC in their own backyard. The Greek striker suffered an injury shortly after that goal but has made a full recovery, as Vukomanovic has a fully fit squad at his disposal.

“What makes this league interesting is the fact that any team can beat any other team. Our next opponents are very strong. Recent form is not a factor because our three victories came after three successive defeats,” said Vukomanovic. “We know both teams will be motivated to fight for points. We struggled against them last season in the league and semi-finals, and I expect nothing different from the next game,” he added.