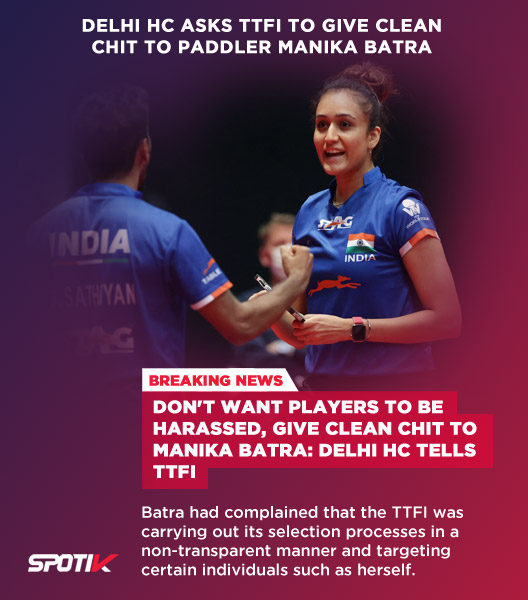 The Delhi High Court said that it does not want any player to be unnecessarily harassed and asked the Table Tennis Federation of India to give a clean chit to the country’s star paddler Manika Batra, who made a complaint against the national sports body.

Justice Rekha Palli, who had earlier directed the Sports Ministry to hold an inquiry against the sports body, said that according to the report, which is filed in a sealed cover, no fault could be attributed to the player for seeking a personal coach.

The judge was hearing Batra’s petition alleging that TTFI was carrying out its selection processes in a non-transparent manner and targeting certain individuals such as herself.

Batra, who was left out of the Indian contingent for the Asian Table Tennis Championships, has alleged that the national coach Soumyadeep Roy “pressurised” her to “throw away” an Olympic qualifier match in favour of one of his trainees.

“I am not happy the way the federation is functioning. You are trying to probe a person for no reason. Is your federation willing to take a stand? Is it willing to withdraw the show cause issued to her? I have seen the inquiry report. Idea is to resolve… if she can go and concentrate on matches. This is not to perpetuate,” the court told the counsel for TTFI.

The court further observed: “There is a finding (in Centre’s report) that there is no fault on her part (if she says) that I want a personal coach. The report says very clearly that attributing fault on petitioner would not be appropriate.”

“At the moment, a player should not suffer. The country cannot afford to have players come to courts… I want you to give a clean chit to her, saying no inquiry is needed. (That there is) no question of any misconduct on her part,” said the judge as she granted time to counsel to seek instructions.

During the hearing, the court also pulled up the TTFI for “overreaching” its order directing an inquiry by the Centre into its affairs, saying it “will take suo motu contempt”.

Senior counsel Sachin Datta, appearing for the petitioner, based on the correspondences exchanged between the two sports bodies, said that on the same day as the court directed initiation of the inquiry, TTFI attempted to circumvent the direction by writing to International Table Tennis Federation to start its independent inquiry.

The senior lawyer urged that a court-monitored inquiry be ordered into the petitioner’s allegations and the functioning of TTFI.

Senior Counsel Sandeep Sethi, representing TTFI, stated that there was no malafide on part of the sports body and claimed that the same would become clear after perusing the series of emails exchanged with the international body.

The court directed that the correspondences filed by the TTFI be brought on record at the next hearing on November 17.

In her petition, the Commonwealth Games gold medallist and Khel Ratna awardee have sought to quash TTFI’s rules mandating compulsory attendance at the National Coaching Camp for selection in international events.

It stated that Table Tennis is an individual sport, which requires specialised training with support staff and thus the rule against personal coaching is arbitrary, irrational, absurd, and has no nexus with achieving excellence in an individualised sport.

While staying the rule on September 23, the court had said that mandatory attendance at the national camp was enforced “at a point when there was a complaint pending against the national coach” and the same “does not inspire confidence”.

Earlier, the Centre had stated that the federation’s rule on compulsorily attending the national camp was in the teeth of the sports code and defeated merit.