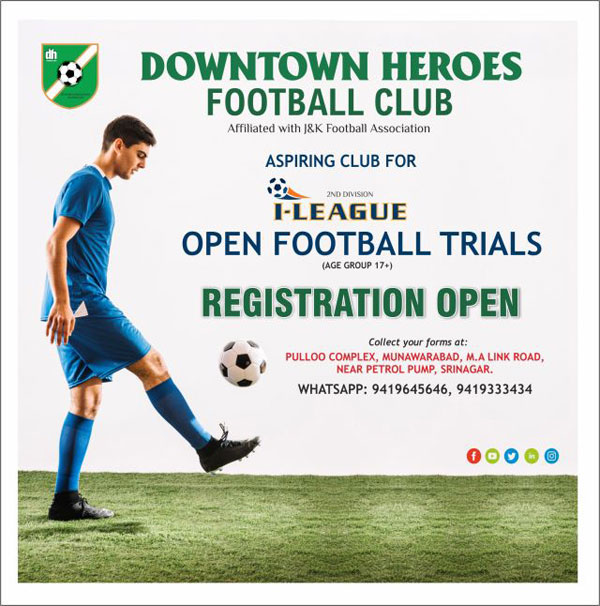 The football club based in old city of Srinagar, Downtown Heroes Football Club is going to conduct its first open selection trials in Srinagar.

In the statement issued said that the club will be holding its open selection trials for selecting its senior football team for the upcoming season.

“We will be holding open selection trials for the players above 17 years age group to select team for our senior side. It will be an open selection process in which experts would shortlist players for our team. The registration for selection trials is open now while as date of trials would be announced later,” read a statement issued by the Club.

The statement further said that club came into existence in year 2018 and intended to hold mega selection process for the 2019 season. However due to situation in Kashmir club couldn’t go ahead with its plans.

“This club, Downtown Heroes FC is based in the heart of Srinagar City, in Old City which is also known as Shahr-E-Khaas. We are affiliated with J&K Football Association (JKFA) and we intend to provide all kind of facilities and platform to our players,” it added.

Players can collect their registration forms from club office at Pullo Complex near Petrol Pump Munawarabad Srinagar or can contact on whatsapp no: 9419645646 , 9419333434.