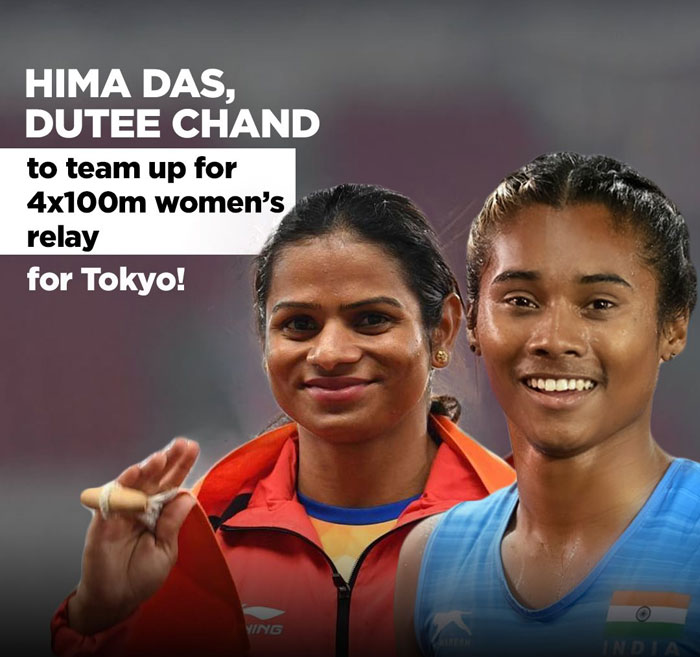 Indian athletics fans could soon witness Hima Das and Dutee Chand run together after it was announced that they would team up in the 4x100m women’s relay.

India has not qualified for the 4x100m women’s relay in the Olympics since Sydney 2000 and pairing up the country’s two most prominent sprinters is a proactive step to achieve that goal.

“We have a young and new team. It’s good that Hima is also there. All the sprinters are eager to perform and everyone is working hard towards the common goal of qualifying for the Olympics,” Dutee Chand .

For Hima Das, this will be a first instance of running in a shorter relay. After bursting onto the scene as the 400m World Junior champion in 2018, Das has been beset by back injuries, forcing her to shift focus to the 100m and 200m sprints.

“There is no back issue when she runs the 100m. So, we decided to put her talent to use in the shorter relay,” said India’s chief athletics coach, Radhakrishnan Nair.

India’s 4x100m relay squad also includes sprinters Archana Suseendran, Himashree Roy, Sneha PJ and Diandra Valladares – not many of whom have run together in a relay team.

The team will need at least three to four weeks of group training to build coordination and be confident in each other’s abilities.

A top-eight finish in Poland will hand the 4x100m women’s relay an automatic berth at the Tokyo Olympics.

In case that does not happen, the team has to be in the top 16 by June 2021 to earn the Tokyo ticket and Rio 2016 Olympian Dutee Chand has set a target of 43 seconds, which she believes could be good enough to qualify.

“We have been doing well in the relay for the past couple of years, but the current lot is super good. All we have to do is combine as a unit to clock a good time. Something below 43 seconds will be good,” reckoned Dutee Chand.

“An impressive performance by us this time will be a huge boost for sprinting in the country,” she concluded.