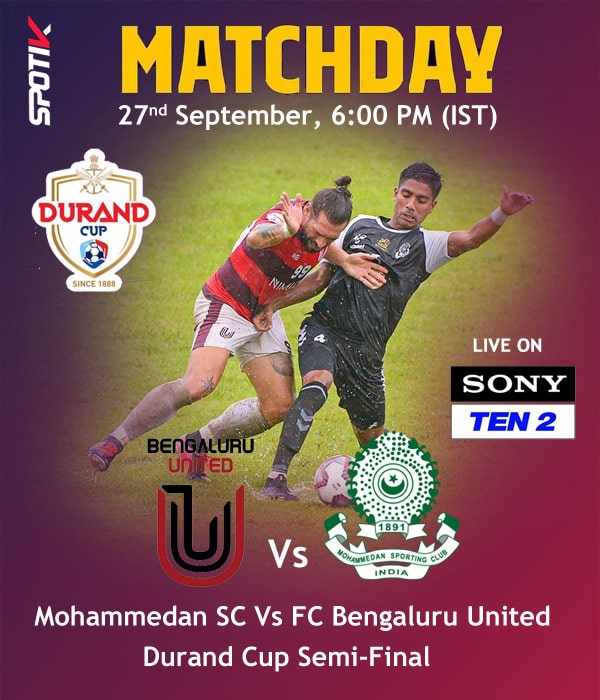 The only local side in the 130th edition of Durand Cup football, Mohammedan Sporting, will be counting on the home support when it takes on FC Bengaluru United in the first semifinal match at the Salt Lake Stadium on Today.

This will be the second match in the tournament that will open gate sales to 50 percent capacity, in accordance with the existing COVID-19 protocols.

Apart from avenging the 0-2 loss it suffered against the same opposition in the group league stage, Mohammedan Sporting will also be looking to realise its fourth appearance in the final of Asia’s oldest football tournament.

In this regard the I-League side will be bolstered by the confidence of beating the defending champion Gokulam Kerala FC in the quarterfinals.

FC Bengaluru United has had a fairly good showing in the tournament and has progressed to the semifinals with an unbeaten record.

The Bengaluru-based Second Division league club earned a bye in quarterfinals after its opponent Army Red pulled out owing to COVID-19 infections in the squad.

The disciplined brand of football it displayed in the league stage will be enough to make it a capable challenger to the home favourite.

“We are very glad that we will play in the presence of fans, they are very important to us. We want to please them with a beautiful game and a good result,” said the Mohammedan Sporting coach Andrey Chernyshov ahead of the match.

Richard Hood, the head coach of FCBU, also sounded confident. “Nothing changes in our approach.

Our desire to win will have to be stronger than that of our opponent and we will count on our collective belief and intent to script the result,” Hood said.

According to the organiser, the match will be live streamed on the addatimes app.

It will also be broadcast live on the Sony sports network on their Sony Ten 2 SD and Sony Ten 2 HD channels. The kick-off is scheduled at 6 pm.