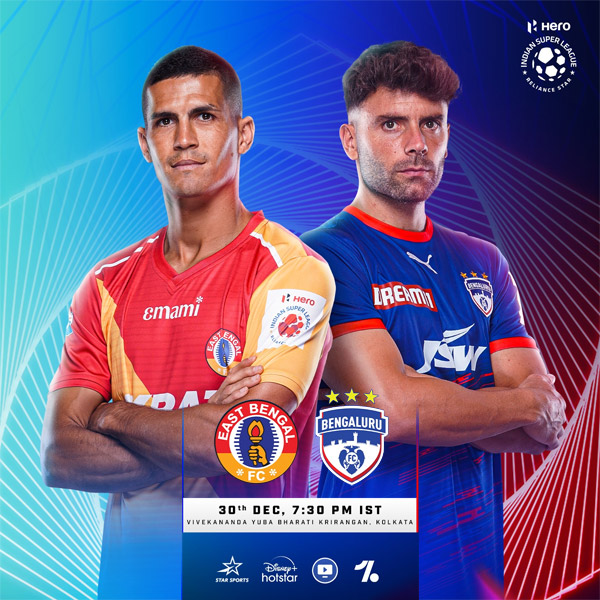 East Bengal FC return after a week’s break at the Vivekananda Yuba Bharati Krirangan Stadium to lock horns with Bengaluru FC in the Hero Indian Super League (ISL) in Kolkata on Friday. When the two sides met earlier this season, the Torch Bearers notched a narrow 1-0 win over the Blues in their own backyard.

The two teams are now in a position where they could directly affect the other’s playoffs qualification chances – as both teams have to do some catching up for sixth spot. With Bengaluru FC nine points and East Bengal FC ten points off sixth place, an outright result either way could be a big blow to the team that loses.

Two weeks ago, in their last Hero ISL fixture, East Bengal FC lost 3-0 against league leaders, Mumbai City FC. It was the second consecutive one in which the East Bengal FC failed to find the back of the net. The last time that happened was earlier this season, prior to when Stephen Constantine’s side beat Bengaluru FC.

Despite the team’s position on the table Suhair VP and Mahesh Singh have been impressive for down the flanks for East Bengal FC this season. The duo has recorded impressive numbers, with ten goal contributions in as many games between them.

Cleiton Silva is the club’s leading goal-scorer this season, scoring five goals from ten games. The striker scored the winning goal against Bengaluru FC in the reverse fixture and will be eyeing another one against his former club when the two sides meet next.

“The target is three points. In every match, that is the target. We want to win every game we play and I think that is normal. We fight, and at times, it is good enough,” said Constantine.

“Three wins in ten games is not good enough, but we have assessed the performance so far and the players are working hard in training. We just need to be patient because we are on the right track,” he added.

Like their opponents, Bengaluru FC were also blanked 3-0 in their last encounter. The Blues fell to their seventh defeat of the season against Hyderabad FC. On the road, Simon Grayson’s men have won just one out of their six games so far. However, their next opponents have the worst home record in the league after losing all four of their home games this season.

Grayson has room for one more foreigner in his first-choice starting XI as the club sweats on getting recent signing Pablo Perez fit to get more game time. The Spaniard is yet to start a game this season as all his appearances have come from the bench.

“We have to be careful that we don’t rush him [Perez] into the team too much. However, on the other side, I want to rush him into the team because he is a very good footballer. He is quite versatile and has worked hard since he has been here. He will get into the team very soon with the quality that he has shown,” said Grayson.

Including the encounter earlier this season, the two sides have faced each other five times in the Hero ISL. Both sides have won twice, while one game has ended in a draw.