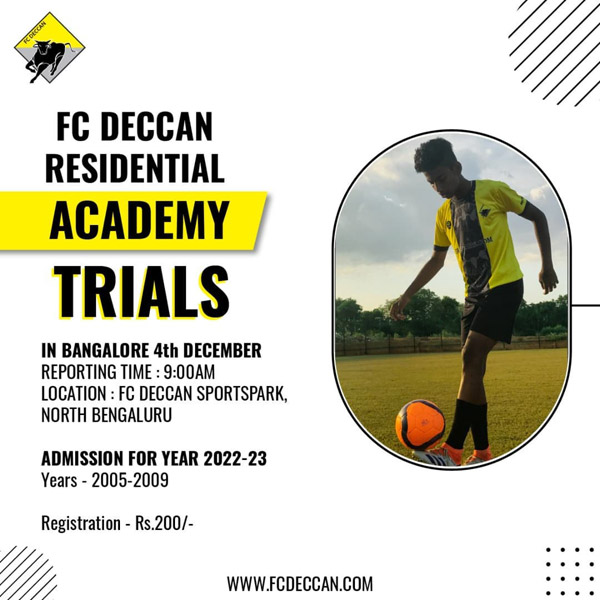 Football has been main focus of the promoters and have worked with i-League club Churchill Brothers FC as both technical and kit sponsor for the season 2016-17.

The key concept of the programme is to bring together as many people as possible through football. The grassroots programme advocates exchanges and sharing human values and, of course, promotes the pleasure of practising our marvellous sport.

FC Deccan Academy is a fun and friendly environment with a mix of International & Qualified Indian coaches.
FC Deccan Academy’s partnerships with Faimo Sports GMBH, Germany promise to provide students with opportunities like never – with academy coaches from these clubs undertaking training camps in Bengaluru, as well as the chance to visit & train in these academies around the world.

Our consultants & coaches for FC Deccan Academy includes I-League coaches, I-League players, international traveling coaches etc. All sessions for the children will be custom designed and will be at par with FIFA standard.

At FC Deccan residential school program, we scout for players from different locations across India who are young and aspiring players.

The program covers a high-performance football training program based on our Germany Club partner methodology.
These selected players undergo rigorous training on daily basis and simultaneously pursue their education, it is a unique and exciting opportunity for players aged 10-17 to experience specialized football camp training through renowned coaches from FC Deccan Academy. The Program helps the players reach their full potential through a fully integrated football program.

FC Deccan own’s 110000sqft of facility which has one 11-a-Side natural turf, three 5-a-side artificial turf, gym and café.
FC Deccan has tied with premier schools in Bengaluru to provide both online and offline classed for all grades.

Program Head: SAJITH KUMAR V
Mr.Sajith Kumar conquered several peaks with MEG (Madras Engineering Group) first as striker and then as a coach which saw him guide Services to their National title in 2012, a first after a gap of 51 years.

Sajith grew with the MEG side in the 90s and his skills helped him make the Karnataka U-21 squad. Soon, the Kolkata’s and Goan’s club too showed interest in him. Sajith has NIS Diploma from Patiala under GD Malhotra. Having tried 3-5-2 formation in MEG help win their first Super Division league title for the first time. In between, Sajith was sent by the Army to coach the Royal Bhutan Army Team. Having vast experience as a player as well as coach, Sajith now heading the FC Deccan Elite Program which is the best youth program for U17 to U21 players., and to train together on the intercontinental trips, both summer and winter. In addition to developing their soccer skills, the players will extend their horizons by partaking and sharing in other cultures throughout this program. The Elites is where they facilitate
their learning environment, from and with each other as a player, but also to grow from a youth player to the desired professional with a top sport mentality.

Assistant Coach: MOHSIN PASHA
Mr.Mohsin Basha is AIFF “B” certified coach, with experience in handling coaching academy for the U-13, U-15, U-17, and U-19 teams.Mohsin will be assisting Program Head in training and coaching the Elites to help reach the players to their full potential.