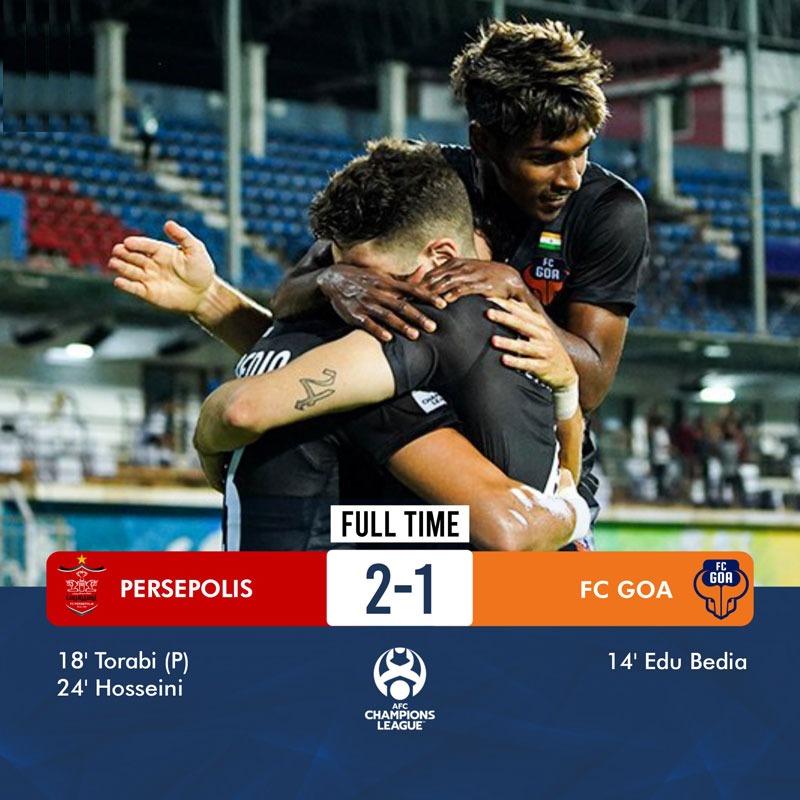 Goa: Islamic Republic of Iran’s Persepolis FC made it three wins out of three in Group E of the 2021 AFC Champions League with a 2-1 defeat of India’s FC Goa on Tuesday.

Victory for the 2018 and 2020 finalists, however, was only achieved after FC Goa created another milestone by scoring their first AFC Champions League goal to take the lead at the Pandit Jawaharlal Nehru Stadium .

Persepolis ultimately proved too strong as they added to the earlier victories against Al Ahli Saudi FC and Al Rayyan SC to open an impressive five-point lead at the top of the standings at the halfway stage.

Persepolis started the tie on the front foot and had their first look at goal after 10 minutes but Ahmad Noorollahi sent his free-kick straight into the arms of FC Goa custodian Dheeraj Singh.

FC Goa gradually grew into the match and were rewarded in the 14th minute when Edu Bedia (pictured below) rose high to nod home Brandon Fernandes’ free-kick to register a historic moment for the Indian club.

Persepolis, however, came back fighting and equalised when Mahdi Torabi (pictured below) sent Dheeraj Singh the wrong way from the spot in the 18th minute after Isa Alkasir had been brought down inside the box.

Persepolis increased their intensity of play and captain Seyed Jalal Hosseini scored his second of the campaign when he angled his header into the back of the net following Torabi’s cross from the left flank.

Dheeraj Singh, FC Goa’s star in the 0-0 draw with Al Rayyan on Matchday Two, was at his best in the 42nd minute to deny Hossein Kanaani from the penalty spot following a foul on Ehsan Pahlavan.

The FC Goa goalkeeper was kept busy after the restart, foiling Torabi just a minute in and then saving Hosseini’s header from inside the area moments later.

In an effort to boost their attacking threat, FC Goa sent Princeton Rebello and Ishan Pandita in place of Glan Martins and Brandon Fernandes respectively but Persepolis continued to pull the strings to see out the match for another three points.

The two sides will meet again on Friday with Yahya Golmohammadi’s team aiming to take a step closer to the Round of 16 while FC Goa will surely relish another go at Persepolis.