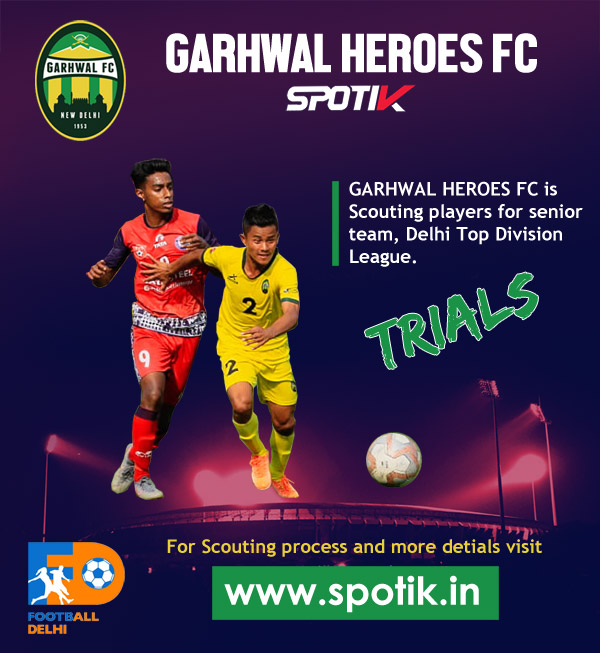 Interested players can mail their Cvs or Profiles to:

Shortlisted players will be contacted for the trials. Age Group: 18+
Come and be a part of Delhi’s oldest club, a club driven by the community.

Garhwal Heroes FC was initially set up by Kesar Singh Negi as a platform for young players of the Garhwali community to compete locally in Delhi. As the club gained popularity, it was formally registered with the Delhi Soccer Association (DSA) in 1953. Since then, GHFC has regularly featured in the league championship organized by the DSA. One of the most memorable moments came in 1986, when GHFC were crowned the champions of the DSA Senior Division. Unfortunately, the one and a half decades following the historic triumph saw GHFC beset by financial problems which resulted in the club being relegated to the A Division and then the B Division of the Delhi League.

The club got a fresh lease of life when it was taken over by B. S. Negi and M. S. Patwal in 2001 following which the club gradually started its ascent once more. From the nadir of the B Division, the club gained promotion to ‘A’ Division and then to the Senior Division in 2005. Since then, GHFC, backed by strong community support, has consistently delivered strong results in the Senior Division which culminated in reclaiming the lost glory by winning the Delhi Senior Division League once more in 2012–13.

In order to keep raising the bar, GHFC now has ambitions to play the I-League 2nd Division from 2013–2014 onwards. Always a community and youth-oriented club, GHFC entered into a historic partnership in 2013 with Bhaichung Bhutia Football Schools – the largest and most reputed football youth development setup in India and Delhi NCR.