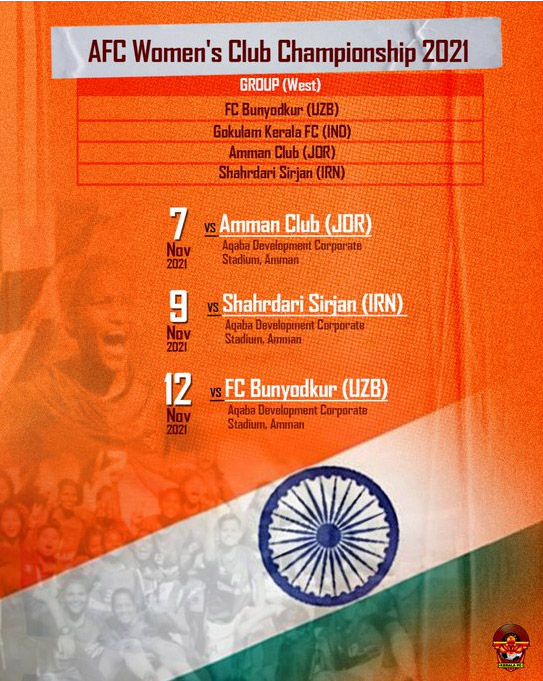 Gokulam Kerala FC will play its AFC Women’s Club Championship 2021 – Pilot Tournament at Amman in Jordan from November 7 to 12.

The Kerala club is grouped among the league winners from Uzbekistan, Jordan and Iran in the championship. The Asian Football Confederation is yet to release the schedule and venue for the knockout stages of the tournament.

What the club said

“We are excited to represent the country. All the clubs in our are tough teams but we will try our best in the championship. This is the first time a club from India taking part in the women’s continental cup. We have to give our best and make the country proud,” said PV Priya, the head coach of Gokulam Kerala FC.

“It is going to be a tough group but we are looking more than mere participation. We need to prepare well and we hope we can make history,” said VC Praveen, the president of Gokulam Kerala FC.

In May, the AIFF had confirmed that an Indian team will take part in the AFC Women’s Club Championship 2020-21. The tournament was the first of its kind, planned by the Asian Football Confederation (AFC). The tournament will feature eight teams from eight different nations and will take place between October 30 and November 14, 2021.

Group A (East) will consist of representative clubs from Chinese Taipei, Myanmar, Thailand and Vietnam, while Group B (West) will feature a club each from India, IR Iran, Jordan and Uzbekistan. The reigning Indian Women’s League champions will represent the country.

However, in light of recent developments, it has become difficult for the AIFF to organize the IWL. This, in turn, made it possible for Gokulam Kerala to get the nod to take part in the Asian Championship.