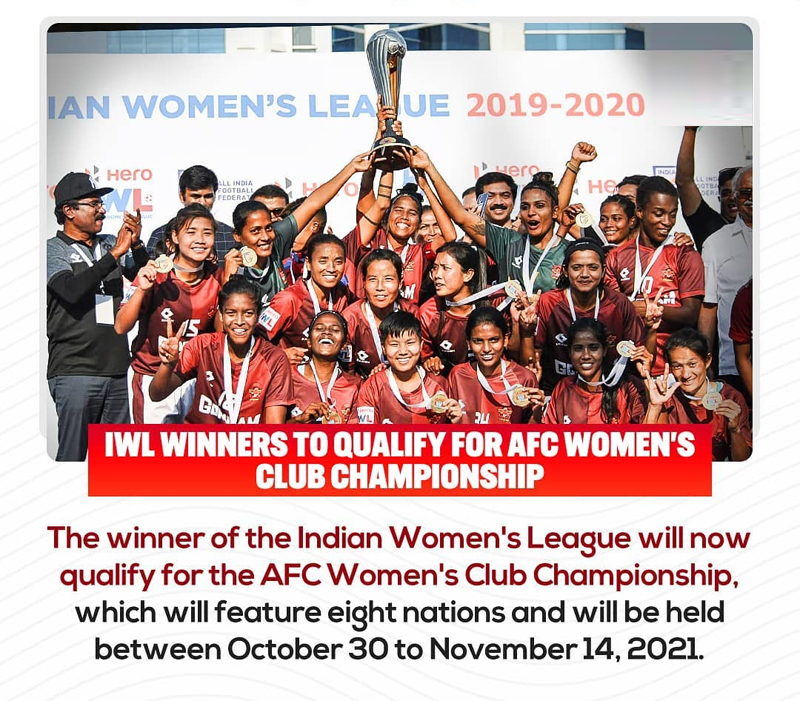 Asian Football Confederation (AFC) is all set to conduct the first-ever edition of the AFC Women’s Club Championship in 2021.

Eight teams from eight different countries will take part in the maiden edition of the competition. From India, the reigning Indian Women’s League (IWL) champions Gokulam Kerala will participate in the tournament.

The competition will feature eight teams and will be played between October 30 to November 14 this year. Group A (East) will feature clubs from Chinese Taipei, Myanmar, Thailand and Vietnam and Group B (West) will have a club each from India, Iran, Jordan and Uzbekistan.

What does this competition mean for Indian Women’s football?

All India Football Federation (AIFF) General Secretary Kushal Das was elated with the introduction of the AFC Women’s Club Championship as he felt that an Indian club participating in such a continental competition will be a great boost to women’s football in the country.

“An Indian club playing in the AFC Women’s Club Championship is a great opportunity to boost the growth of women’s football in India. We already have two International events – the AFC Women’s Asian Cup, and the FIFA U-17 Women’s World Cup lined up in 2022. As a prelude to that, Indian representation in the Club Championship will further redefine women’s football in India to a large extent by capturing the imagination of all fans,” said Kushal Das.

AFC has plans of implementing the AFC Women’s Club Licensing System in order to prepare clubs and Member Associations, ahead of the inaugural AFC Women’s Champions League in 2023. The AIFF will soon conduct workshops regarding this for the clubs across the country.

India are all set to host the FIFA U17 Women’s World Cup and AFC Women’s Asian Cup in 2022 for the first time in history. The U17 World Cup was initially supposed to be held in 2020 but it got postponed to 2022 due to the ongoing COVID-19 pandemic.