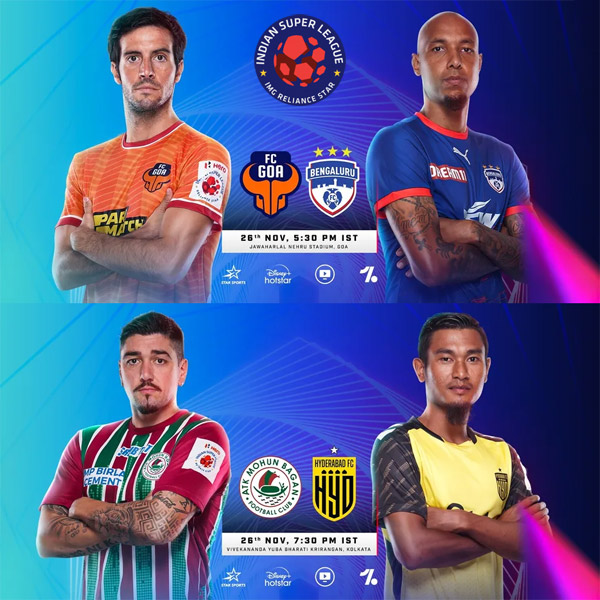 FC Goa will be looking to extend their four-match unbeaten streak against Bengaluru FC when the two 2018-19 season finalists take on each other in the Hero Indian Super League (ISL) match at the Jawaharlal Nehru Stadium in Goa on Saturday. The Gaurs will be eyeing back-to-back wins for the first time since the start of the season, while the Blues will be itching to end their four-game losing streak. (League Standings)

FC Goa recovered from their loss against Kerala Blasters in an ideal manner with a 3-0 victory against ATK Mohun Bagan FC last week. Noah Wail Sadaoui came off the bench and wrapped it up for the Gaurs with his fourth goal of the season.

That made Sadaoui the joint-highest goalscorer of the Hero ISL 2022-23, tied with Chennaiyin FC’s Abdenasser El Khayati and Kerala Blaster FC’s Ivan Kaliuzhnyi. Alvaro Vazquez has taken Sadaoui’s spot in the starting eleven after returning from an injury. However, the striker has been unable to find the back of the net in the last two games. (Club Statistics)

Speaking ahead of the game, FCG Head Coach Carlos Peña said, “It’s going to be a very tough game. We will play against a team that is not in a good mood right now, but they have very good players who have a winning mentality. Tomorrow will be one of the toughest, if not the toughest, games we have played till now.”

Bengaluru FC are coming into this game struggling with an unprecedented vein of form. The Blues were at the wrong end of a 4-0 loss against Mumbai City FC last week. The loss saw them equal their record of four successive defeats in the 2020-21 season of the Hero ISL. The larger problem remains that the Blues have failed to score in four successive games for the first time in their Hero ISL history. A loss to the Gaurs will make this their worst start in the league. Concerns will be plenty in the final third for Simon Grayson’s men as they have scored the joint-fewest goals so far, netting just two in six games. (Club Statistics)

Grayson has been trying to find the right combination for quite some time this season now but he is yet to find a solution that Bengaluru FC desperately need. Skipper Sunil Chhetri was dropped to the bench in the last game, and Danish Farooq was deployed down the left flank. However, even that gamble failed to pay off.

“After the game against Mumbai, the players saw a different side of me in the dressing room. Publicly, I have always backed the players, but the second-half performance did not warrant any backing from me because it was not good enough,” said Grayson. “But I have seen a good reaction and a positive vibe around the players in training after that and also noted an edge that they have been missing so far. That is the reaction in training, but we have to see how the reaction is on the pitch against Goa,” he added.

The two sides have met 11 times in the Hero ISL, including the final of 2018-19. Bengaluru FC lifted the trophy on that day. In total, the Blues have recorded five wins, while the Gaurs have just won thrice in this fixture.

A repeat of last season’s playoff semifinals will pit ATK Mohun Bagan against defending champions Hyderabad FC in the Hero Indian Super League (ISL) match at the Vivekananda Yuba Bharati Krirangan in Kolkata on Saturday. The men in yellow eliminated the Mariners and went on to lift the trophy on that occasion. This time around, Juan Ferrando’s men will be eyeing redemption.

The last outing was one to forget for ATK Mohun Bagan as they let in three goals against FC Goa last week. In addition to that, the Mariners also failed to score for the first time this season. The last time that happened was in the last league match against Jamshedpur FC in the 2021-22 season when the Mariners lost 1-0. (Club Statistics)

Despite the outcome of the last game, Ferrando may not tinker with his starting XI. The front three of Liston Colaco, Dimitri Petratos, and Manvir Singh have been effective all season but failed to find their rhythm in Goa. Ferrando’s biggest concern will revolve around the absence of midfielder Joni Kauko, whose night ended abruptly in the last game due to a knee injury that has forced him out for a lengthy period.

“We are thinking of the present and the next match. Of course, the FC Goa result was quite disappointing for everyone, but that was five days ago,” said Ferrando. “The most important thing now is the game tomorrow. It’s a new opportunity to take three points, and we will be ready for it,” he added.

Hyderabad FC’s unbeaten start came to an end in their clash with Kerala Blasters last week. The defending champions started a game without Laxmikant Kattimani for the first time this season after the keeper suffered a knee injury. (Club Statistics)

The club recently confirmed that the injury has ruled the shot-stopper out for the rest of the season. The 33-year-old had made a stellar start this season, keeping four clean sheets in six games. Anuj Kumar will guard the goal for them in his absence.

“I expect a very difficult game. They have quality foreign players and quite a few young Indian players who are already a part of the national team,” said Hyderabad FC head coach Manolo Marquez. “It will be a very difficult game for us and also for them because, in this league, any team can beat you. It can be a good game between two good teams. Let’s see what happens,” he added.

The head-to-head record between these two sides does not favour the defending champions, as they have won just one game out of the eight played. However, that one victory came in the playoff semifinals last season, which helped Hyderabad FC win the title. The Mariners have won thrice, and four matches have ended in draws.(League Standings)