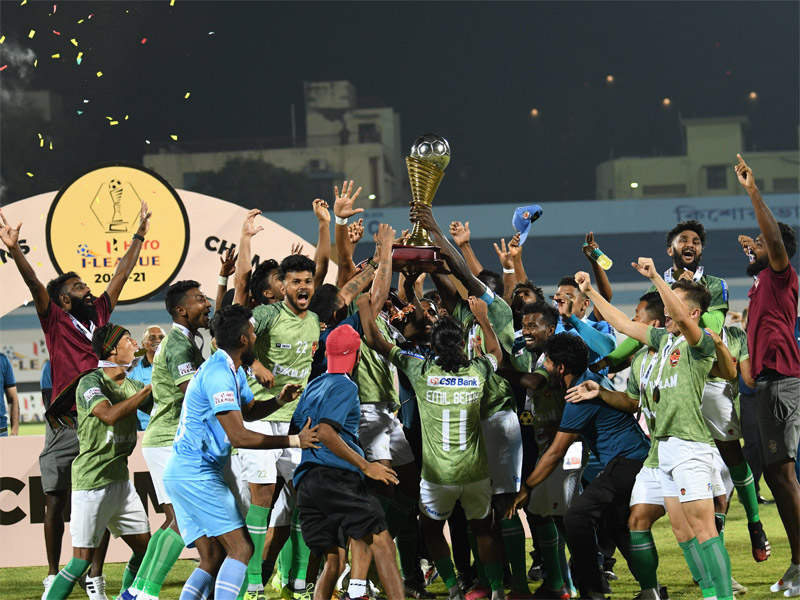 Gokulam Kerala FC on Saturday clinched their first I-League title in spectacular fashion as they came back from a goal down to beat TRAU 4-1 in the final match of the season in Kolkata.

With Churchill Brothers winning 3-2 against Punjab FC in the day’s other match held simultaneously at another venue here, Gokulam shared points (29) with the Goan side but were crowned champions on head-to-head record.

In the two matches the two sides had played in the season, Churchill had won 3-2 once while Gokulam had emerged 3-0 victorious in the other.

Gokulam thus qualified for the group stage of the AFC Cup next season, Asia’s second tier club competition, as I-League champions. They also became the first side from Kerala to win the I-League title.

The winning team’s coach Vincenzo Alberto Annese could not hide his joy at his players’ achievement.

“This is the best day of my life. I feel so happy and I feel amazing to be crowned a champion. I am immensely proud of my team and we deserved to be champions. We outscored all teams and we have played like champions in this season,” Annese said.

“This means everything to me. This is my first season in India and it has already been a very special one. We have a very special team and nobody plays the style of football that we play,” he added.

Bidyshagar, a revelation in the I-League much like his team TRAU, opened the scoring when he produced a brilliant finish from outside the box in the 23rd minute.

Just after resumption, Chanso Horam had a golden opportunity to hand TRAU their second goal of the match but his chip shot went inches over the bar, following a fine counter-attacking move.

Gokulam forward Dennis Antwi failed to find the net in the 62nd minute as his header went agonisingly wide off an Emil Benny cross from the right flank.

Sharif Mohamed’s free kick in the 69th minute from the edge of the box grabbed the equaliser for Gokulam Kerala FC. The comeback was well on course in the 74th minute when Emil Benny tussled past his marker and slotted home through Amrit Gope’s legs to hand Gokulam the lead.

After TRAU player Vincy Barreto was sent off in the added time, Mohammed Rashid scored the fourth goal for Gokulam, adding more gloss to complete the remarkable comeback.

In the other match, Churchill surged into the lead in the ninth minute when Clayvin Zuniga was brought down inside the box. Off the resultant penalty, Slovenian striker Luka Majcen converted from the spot by sending rival custodian Jaspreet Singh the wrong way.

Churchill doubled their lead in the 25th minute through Zuniga who scored his second goal in the first half added time to give the Goan side a 3-0 lead.

Facing an uphill task, Punjab FC managed to pull one back in the 65th minute through Joseba Beitia and added another four minutes later through Papa Diawara.