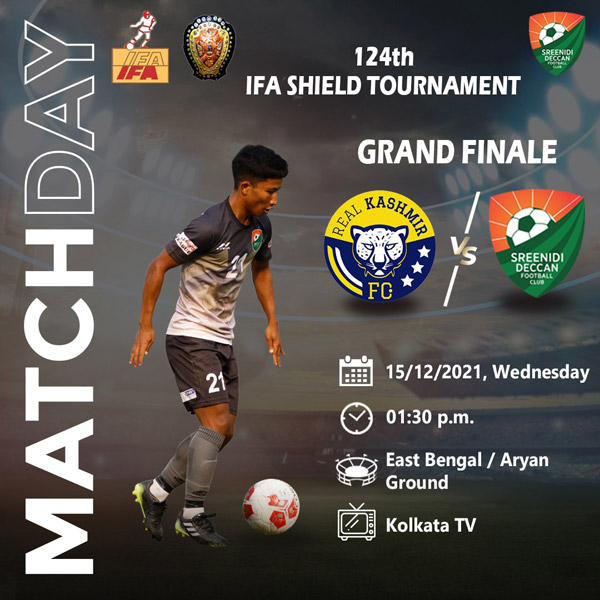 I-League debutant Sreenidi Deccan FC, with its resolute and compact defence, stands in the way of Real Kashmir’s bid for a second successive title when the two teams clash in the IFA Shield final on Wednesday.

Less than six months after being launched, the Vizag outfit is in the middle of a fairytale campaign making into the final of the second oldest football tournament of the country on debut.

The Santiago Varela-coached outfit showed supreme ball control and maintained intensity to edge out Railway FC 2-1 in the extra-time at the East Bengal ground.

The Deccan club has showcased a high level of finesse and executed their plans meticulously throughout the tournament.

But what has stood out has been their resolute defence conceding just two goals from five matches as the likes of Mason Robertson and Fran Gonzalez will have a tough ask in hand when the two teams clash it out.

That they have already played in the same venue will act as an advantage for Deccan outfit.

“We are fully prepared for the match. Yes they have played the final last year too but that’s not playing in our mind,” defender Samad Ali Mallick, who is well aware of the conditions with his past experience in East Bengal, said.

“We are focused on our game. We have trained in Hyderabad for last two months and it’s showing in our collective game in this tournament.

“We’re very excited to play the final in such a short duration. No team will look to afford an inch, it will be a strong fight,” he added.

Coach Varela said, “We have showed good football in each of our game. But RKFC would be a tough challenge. We will try to do our job, control the game.” Real Kashmir has been supreme in the attack with the likes of Mason, Gonzalez and Shahnawaz Bashir putting up a cohesive display in the midfield.

The only blip has been against the Calcutta Customs when it lost out by a solitary goal in their league outing.

“We have played three I-League teams so far, it gives a lot of confidence to be in the final of a tournament ahead of the I-League,” David said.

“We enjoyed our last season and somehow managed to be in the final this time. We will play with the same intensity.” David further said the Deccan outfit would pose a big challenge and it does not matter that it is a debutant.

“They know our team quite well, they have an experienced coach. It would be a very, very difficult team game. Anything can happen,” David said.

“I don’t think we start as strong favourites. It all comes down to hard work on the pitch,” Mason Robertson said.

Where to watch IFA Shield 2021 final live in India?

The Real Kashmir vs Sreenidi Deccan IFA Shield 2021 final match will be telecast live on the Kolkata TV channel in India.