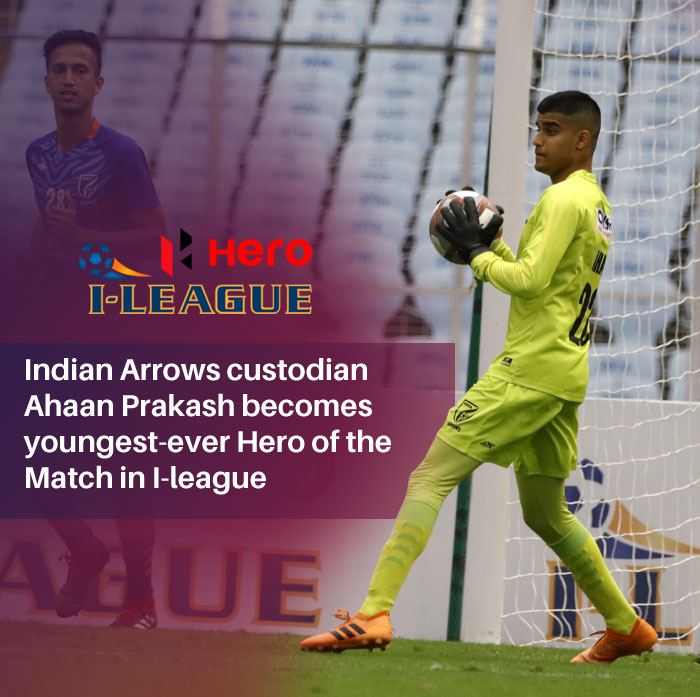 As the Indian Arrows stunned Kolkata giants Mohammedan Sporting to register a memorable victory in the I-League on Sunday, Indian Arrows goalkeeper Ahaan Prakash scripted a piece of history by becoming the youngest recipient of the Hero of the Match award in the league, at the age of 16 years, five months and 25 days. The custodian put in an excellent display to earn a clean sheet and after the match, he dedicated the feat to his family and teammates.

“It’s a very proud moment for me to be the youngest-ever Hero of the Match in the I-League. It is a combined effort from the whole team and all of us played very well today to earn this result. I dedicate it to my parents and my teammates,” he expressed in a candid chat with I-League Media.

It was a stunning display by the Arrows at the iconic Saltlake Stadium as they took the lead in the 26th minute through defender Gurpanthjeet Singh and maintained their advantage throughout the match. Throughout the second half, the Black Panthers piled on the pressure and registered as many as 22 shots in the match but could not breach the Arrows defence, as the AIFF’s developmental side created many chances of their own on the break and ended the game with 46 percent possession.

“Mohammedan Sporting are a very big team in Indian football. But we were confident going into the match and knew that we had to keep fighting till the end and give our 100 per cent on the field. We stuck to our game plan and did really well to get the three points. We had played some good matches before as well but hadn’t got the results we wanted but we were positive ahead of this challenge,” Ahaan stated.

‘FIGHTING TILL THE END’

The 16-year-old, who hails from Bengaluru, has been a part of the AIFF Academy set-up for over one-and-a-half years after he was scouted following his displays at the sub-junior nationals.

“I started playing football at the age of nine in my apartment complex and it was at U-13 level that I played for the first time in formal competition at school level. I played in the Hero Sub Junior League as well, then moved on to SAI (Sports Authority of India) and was there for a year. I played for my state at the sub-junior nationals in Hyderabad, from where I was eventually selected.”

“I actually started out as a defender in school but my coach then switched me to goalkeeper,” he smiled. “He has been a great influence on me and started my journey in football. My parents have also helped and supported me at all times and they encourage me to do whatever I want to.”

Ahaan progressed through the ranks at the AIFF Academy in Bhubaneswar, which has been set up with support from the Government of Odisha at the Kalinga Stadium and stated that he ‘grew in confidence’ from his time there and through the multiple exposure trips, where he got the chance to test himself against a number of foreign teams.

“I didn’t make it through the trials the first time. But when I was called up again, I was determined to make it count and was selected. It was difficult to be away from my family for a long period of time but I knew it was beneficial for me.”

“In Bhubaneswar, we had a great environment around us that focused on sports and the facilities we had were fantastic. On the field, I learned from whatever my coaches taught me and off the field, I learned about the value of discipline, fighting till the end and grew in confidence. Playing against foreigners really helped as they have a different style of play and it helped me gain the experience to play here in the I-League,” Ahaan averred.

GROWING IN CONFIDENCE IN I-LEAGUE

Now in his debut season in the I-League, it has been a ‘massive change’ and step-up for Ahaan and his Arrows teammates, who have grown in confidence with every game they have played.

“The experience of playing in the I-League has been a massive change – from youth football to training at the senior level and playing against experienced pros and foreigners. It has surely benefitted me a lot and I am learning a lot. I always had the dream to play in the I-League but never thought it would come true at such a young age,” he shared.

“In the first couple of games, we were giving away balls easily and could have done better. We weren’t confident enough but as everyone has gained experience over the past few matches, we have the confidence to play against the big teams and keep the ball in play. The guidance from our coaches has helped a lot.”

“This win against Mohammedan Sporting certainly builds confidence and tells us that we can play against such big teams. We are looking to put our best foot forward in the coming games in the league,” Ahaan stated.