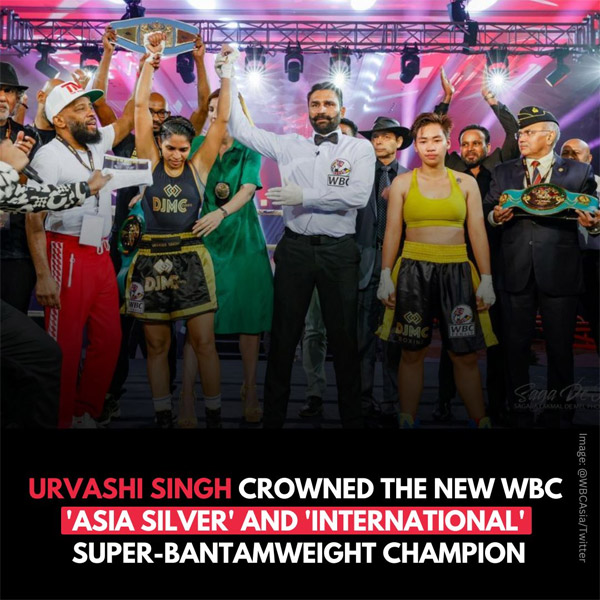 Urvashi (10-3, 6 KOs) was victorious by a unanimous decision over Thanchanok (12-5, 6 KO) on Sunday night. After a tactical few opening rounds, Urvashi started to take control of the bout by the fourth round with her relentless jabbing and combinations to the opponent’s body. Thanchanok, tried her best to return fire but Urvashi was far superior on technical ability, speed and power in her punches.

“I am really thankful to my entire promotions team at DJMC Events led by Mr Rozairo, without whom I couldn’t have imagined achieving any of this,” she said. “I now am the WBC Asia Continental and International Champion.”

Sarjubala Devi wins by a 2nd round stoppage Former Amateur Youth World Champion, Sarjubala Devi (2-0) won her second Pro fight by an injury forced stoppage in the second round of a flyweight contest against Khwunchit Khunya (4-12) of Thailand.

The fight was warming up to be an even contest between the two experienced boxers but a close contact skirmish ended with Khunya clutching her left shoulder and wincing in pain, urging the referee Ajay Salvi to stop the fight.

Sarjubala was coming into this contest after an injury lay-off of over six months. “Both of us had started well, I had warmed up and was getting into my groove in the second round. I was getting more on top, but these things happen in boxing. I really wanted this win, but I do feel bad for her,” she said.

Avikas Tarachand too wins Indian boxer Avikas Tarachand (1-3) knocked out Sri Lankan amateur National Champion Lasindu Eranda in the fourth round of a hotly-contested lightweight fight. Lasindu, a 2019 South Asian Games bronze medallist, was surprised by the aggression shown by Tarachand from the first bell. The experienced Sri Lankan came back strong in the second round with a flurry of counter punches. But Avikas got back into his groove in the third and fourth rounds with power punches, forcing the referee to stop the contest.