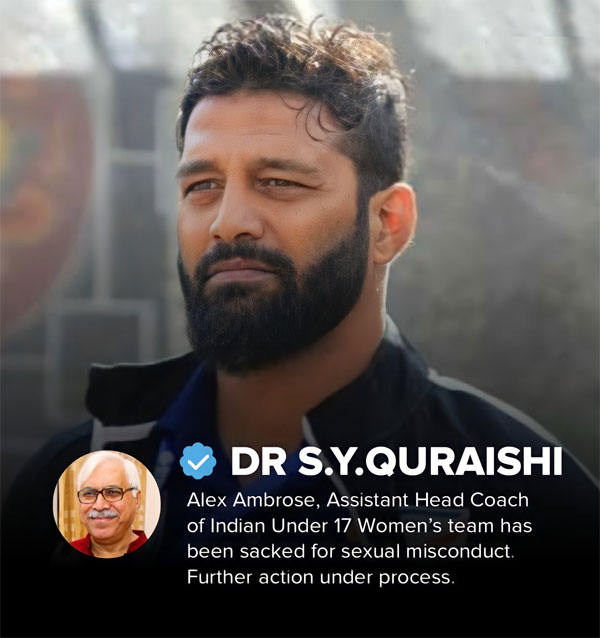 Alex Ambrose, assistant Head Coach of the Indian U-17 women’s football team, has been sacked for sexual misconduct. The news was revealed by Dr. S. Y. Quraishi, member of the Supreme Court-appointed Committee of Administrators (CoA) overseeing the All India Football Federation. The incident was first hinted at in an AIFF statement on July 1, but that didn’t mention the name or specify the offence.

The incident came to light during the U-17 side’s exposure trip to Norway, where Ambrose was allegedly caught in an inappropriate situation with a member of the side. He was recalled immediately to India.

“An event of misconduct has been reported in the U-17 women’s team, currently on an exposure tour to Europe. The AIFF follows a zero-tolerance policy on indiscipline. As an initial action, the Federation has provisionally suspended the individual pending further investigation,” read the previous statement from the CoA. “The AIFF has asked the concerned individual to stop all contact with the team, return to India immediately, and be physically present for further investigations upon his arrival,” the statement added.

Incidents of sexual harassment are only the tip of the iceberg, according to AIFF executive committee member, Anjali Shah, who detailed several such incidents, including some by Ambrose, in a revealing interview with ESPN.

Former footballer Juhi Shah also outlined the inaction of the AIFF and state federations from an incident of sexual harassment in 2014.