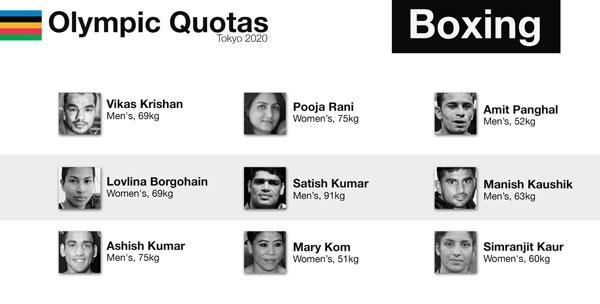 As many as nine pugilists have already booked their tickets to Japan and that underlies Indian boxing’s rapid progress over the last few years – a timeframe which saw several Indian boxers reach global standards.

With a new crop of promising pugilists like Amit Panghal, Satish Kumar, Simranjit Kaur, Lovlina Borgohain and others joining established stars like MC Mary Kom and Vikas Krishan, Indian boxing looks stronger than ever before.

Illustrating his own tale of progress, Amit Panghal recalled, “I had to watch the Rio 2016 Olympics on TV. I wasn’t a top boxer then. I watched Uzbekistan’s Hasanboy Dusmatov clinch gold in my category.

“I lost to him twice in 2017 but was determined to become the best. Then I beat him in Jakarta for the 2018 Asian Games gold medal.”

Panghal has risen up the ranks rapidly since 2017 and is currently the world No. 1 in the world rankings in the 52kg flyweight category.

Primed for a medal run in Tokyo, Panghal also feels that the postponement of the Games hasn’t impeded his, or any other Indian boxer’s, progress in any way.

“It gives us time to focus on our weaknesses. We will progress and go to Tokyo even better prepared next year.”

Pooja Rani, too, will be better prepared. Four years ago she wasn’t able to qualify for Rio 2016 but this time around she was the first Indian female boxer to make the cut for Tokyo 2021.

She credits that to the exposure she got in international tournaments and the victories that built her confidence. With another year in hand, she is now even more determined.

“I had made my mind up that if I left the sport, people should know about me,” – Pooja Rani.

“I have trained at a stadium which had photos of all good players of the country and I always wanted to do just enough to have my photo on the wall as well,” she asserted.