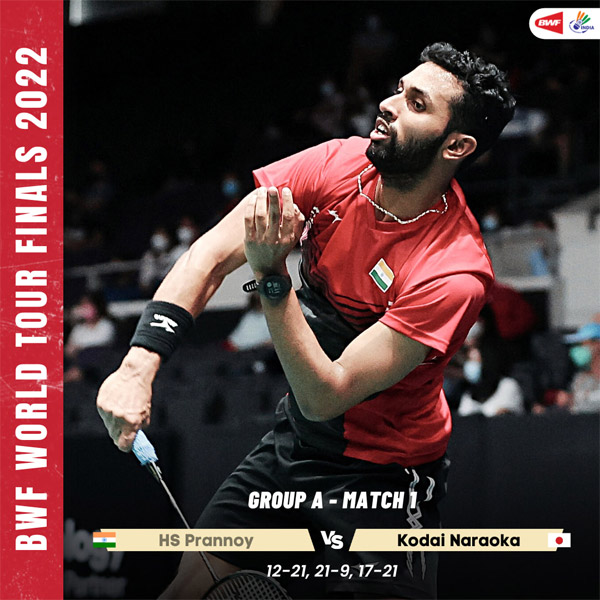 Indian badminton player HS Prannoy lost to Kodai Naraoka of Japan in his opening match of the BWF World Tour Finals 2022 in Bangkok, Thailand on Wednesday.

HS Prannoy was playing with a strapping on the right knee and made a tentative start to the match. Kodai Naraoka was much quicker and led Prannoy 11-6 at the break.

HS Prannoy countered Kodai Naraoka in the second game by playing more at the net. The tactic helped HS Prannoy win seven points on the trot after being tied at 3-3 and then level the match 1-1.

The Indian badminton player stepped up his attacks and started the decider leading 7-5. Kodai Naraoka’s cross-court shots from the net, however, helped him go into the break with an 11-9 lead.

Despite not being able to take the lead, Prannoy equalised thrice after the change of ends in the decider. However, Prannoy’s three unforced errors after the game was tied at 17-17 saw Kodai Naraoka win the game and match.

This was HS Prannoy’s second loss against the 21-year-old Kodai Naraoka. The Indian shuttler was beaten by the young Japanese in the quarter-finals of the Singapore Open 2022 in three games.

HS Prannoy will play world No. 17 Lu Guang Zu on Thursday before facing off against Tokyo 2020 Olympic champion Viktor Axelsen in his final group match on Friday. The top two players from the group will advance to the semi-finals.

But all is not over yet, he will hope to beat Lu Guang Zu tomorrow, and if he could do that in straight games, his campaign could still be alive if Lu can defeat Naraoka on Friday. (Of course, this is with the assumption that Axelsen will win all three of his matches in this group which is not far fetched as far assumptions go).