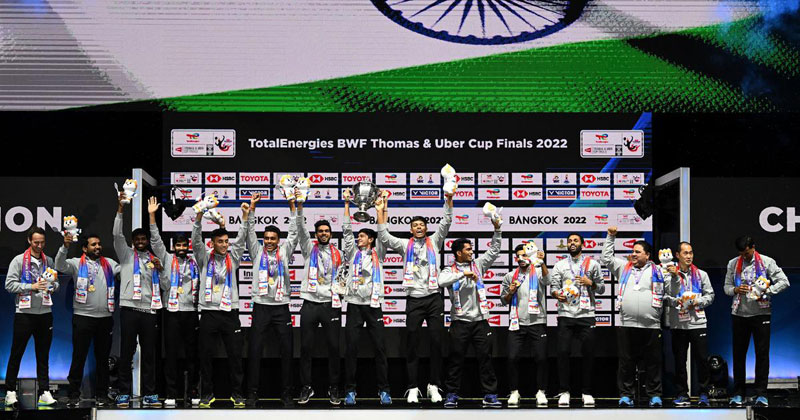 India reached the last four to guarantee a first Thomas Cup medal, but then went on to defeat Denmark and Indonesia to create history.

On Sunday evening, the feeling was yet to sink in. A few hours earlier, Srikanth Kidambi flung down his racquet on the court at the Impact Arena in Bangkok, and greeted his teammates who had jumped the fence to celebrate on court.

The 29-year-old from Guntur had just beaten world No 8 Jonatan Christie 21-15, 23-21 to help India win the Thomas Cup – the men’s World Team Championship – for the first time ever, by beating defending champions Indonesia 3-0 in the final.

Shortly before Srikanth’s win, the doubles team of Satwiksairaj Rankireddy and Chirag Shetty saved match points to beat Mohammad Ahsan and Kevin Sanjaya Sukamuljo 18-21, 23-21, 21-19. And that was after Lakshya Sen overcame a first game deficit to beat World No 5 Anthony Ginting 8-21, 21-17, 21-16 in the first match of the tie.

Later on, coach Vimal Kumar was often found searching for the right words, as he described his emotions when he could finally gather his thoughts. Vimal Kumar, the former chief national coach who has been part of the support staff for the team in Bangkok, couldn’t stop smiling during the entirety of the interaction.

The mighty Malaysians and Danes came tumbling before the record 14-time champions Indonesia were downed 0-3 by the Indian juggernaut that was not prepared to stop short of the gold medal.

But there was method to the madness, as Vimal later explained -–through the laughter and excitement. The feeling had just started to sink in.

Excerpts from his media interaction from Bangkok facilitated by Badminton Association of India:

On the players and team spirit

I have no way to describe it. Fantastic players. I have never seen them so enthusiastic. Srikanth and Prannoy, leading the whole other lot that are very young. They’re all extremely motivated, it’s just an achievement of pure team spirit which I haven’t seen in the past. We always had good players but priority was on individual tournaments. But I was very keen that when they get together, they can definitely achieve.

We have a very talented team now and that has done the trick. I’m telling you, it is these players… Earlier we used to totally depend on our singles players, but now we have a formidable doubles combination in Satwik and Chirag. Every pressure match, they pulled it off. So it is very, very creditable. I will also give a lot of credit to the young Lakshya Sen. Srikanth, Prannoy have the experience, they’ve been playing at the highest level. When it mattered, they delivered for us. It’s just a fantastic team. I’m a lucky coach (to be here).

On where this title ranks in Indian badminton

When you call a nation a top badminton-playing nation, it’s when the singles players, doubles players, they all perform together to win team championships. That is exactly what has happened today. I would rate this as the best, biggest ever for Indian badminton.

In the last selection meeting we looked at the form of players over the last six months, the performance of the players on the international badminton scene. Prannoy stood out compared to B Sai Praneeth.

Prannoy could beat many of the big players, including Viktor Axelsen who he beat in Indonesia. Such things compelled us to include him as the third player. We didn’t want him to go through the trials because we knew that he had slight injury issues, but we took the chance because we knew that if you really give him the time and space, he will do a good job. And he proved us right.

If we had put him through the trials, maybe he’d have got injured. We clearly didn’t want to go through that. We were proven right, and I’m so happy it didn’t go wrong. It was important for us because Prannoy delivered very important matches for us – against Malaysia and Denmark. Denmark was very crucial, it was tough and very close. But he did a good job.

On Lakshya Sen stepping up in the final

What happened, we kept is a secret, Lakshya had food poisoning when we landed here on the first day. He ate something (in Bangalore) and the whole flight he was sick. We got two days of rest for him. We forced him to play against Germany, somehow he squeezed through. He was subsequently given rest again. We had to field him so we could find that balance in the team. It was tough for him.

He got better everyday and today [he delivered]… he had beaten [Anthony] Ginting recently in the German Open, so he had the confidence. But the way he played the first game, I was very disappointed, and I felt that he would lose because it was quite bad, 21-8. And then the way he came back… that showed the young boy, when it mattered, he can really play well. He’s a great addition for Indian badminton.

On Srikanth’s return to form

I think so (he’s back to his best). We’ve seen glimpses of it. We were seeing it at the last World Championships in December. From then onwards he’s shown progress. For three years he didn’t do really well. In 2017 he was awesome, then subsequently, for various reasons, his form dipped. Three years is a long time. But I’m very happy to see him coming back. The other thing he’s become a great motivator for the younger players.

On the team’s strength

It’s the bond. The top two players, the oldest is Prannoy who is nearing 30. Then there’s Srikanth who is 29. I give them a lot of credit because of the way they were interacting.

Rest of the players are very young. Of course, we coaches used to talk to them, but after that, (Srikanth and Prannoy) would sit down and talk (to the team). Motivate each other. What they get from these seniors, it makes a big difference.

Two-three weeks prior we were talking that we had an outside chance. Only thing we needed was to play to our potential. When it really mattered in a team championship, they all played to their potential. That was the key. They’re just a fantastic lot.

When the players firmly believe that we can do something of this sort, then it just clicks. It’s that feeling, that confidence, how they motivated themselves, that’s what gave us this result.

I can also say that the next couple of years, we have another good group of players coming. In doubles, I feel we have some formidable youngsters in the team. They can really mature and play at a high level in the coming years. We can look at defending our Thomas Cup next time, we have that good a team.

On the effects the win will have on Indian badminton

I know when we won the Cricket World Cup in 1983, things turned around for the sport to such an extent. I expect that to happen for Indian badminton. Of course, we have individual players, but they’ve gelled well and they’ve delivered. I’m expecting that sort of a thing for Indian badminton, and I’m very happy that I could see such a thing in my lifetime. This is a dream come true for me.