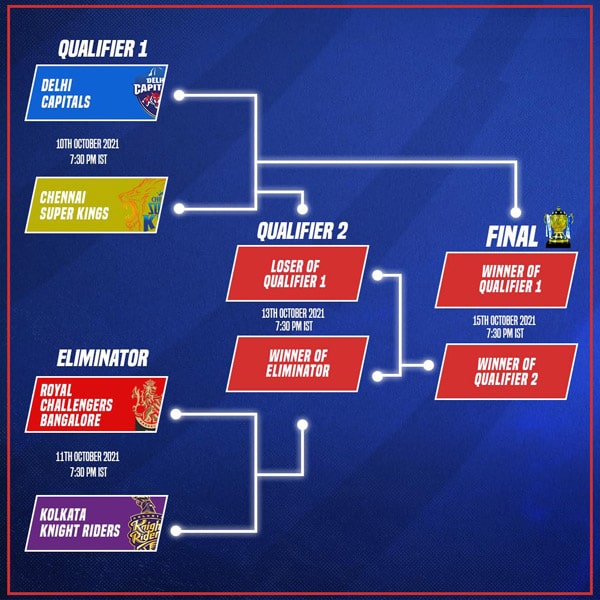 The league stage of the IPL 2021 is finally done and dusted and we have the four teams making the Playoffs – Chennai Super Kings, Delhi Capitals, Royal Challengers Bangalore and Kolkata Knight Riders.

The league stage of the IPL 2021 is finally done and dusted and we have the four teams making the Playoffs – Chennai Super Kings, Delhi Capitals, Royal Challengers Bangalore and Kolkata Knight Riders. Friday’s double-header – the first of its kind considering it were being played simultaneously in Dubai and Abu Dhabi had the power to alter the top four – held a lot of significance.

RCB had the chance to enter the top two, while Mumbai Indians had to pull off nothing less than a miracle – needing to win by 171 runs. But neither happened and we have the top four. The Capitals at the top with 20 points, followed by CSK at No. 2 with 18 points. RCB are tied with CSK at 18 points as well but lose out to a lower Net run-rate, and finally at the fourth spot are the two-time champions KKR with 14 points.

This means that we have the four teams that will battle for the IPL title in the Playoffs. DC and CSK will compete in the first Qualifier in Dubai on Sunday, followed by RCB and KKR fighting in the Eliminator for a place to play Qualifier 2 on Monday. The benefit of the Playoff structure is that it gives the top two teams a second chance in case they fumble.

Qualifier 2 – Loser of Qualifier 1 vs Winner of Eliminator on Wednesday, October 13