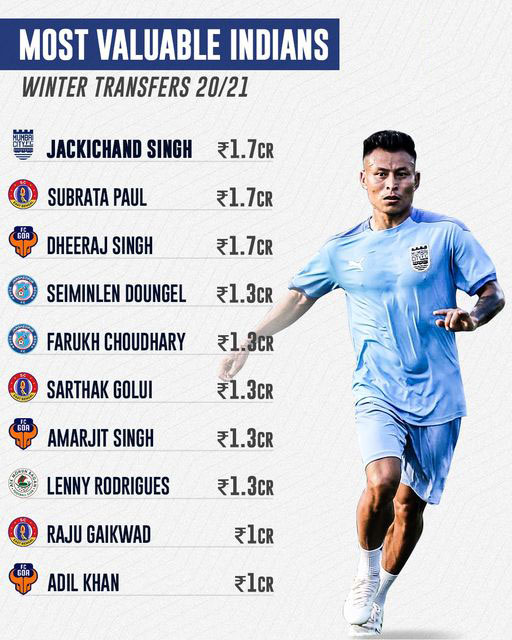 The winter transfer window is over and the Indian Super League (ISL) has reached its business end as the teams enter the final stretch of 4-5 games.

Mumbai City FC are leading the charts after 15 matches with 33 points followed by new entrants ATK Mohun Bagan. The Mariners’ rivals East Bengal who too have joined the league this season are struggling at the bottom half of the league table.

Every single team in ISL have been involved in player transactions in this window with East Bengal being active the most in the transfer market. They have released as many as nine players and have signed four.

The league leaders have signed just one player, Jackichand Singh from Jamshedpur as Farukh Choudhary went the other way.

The Kolkata giants have released as many as five players in this window and have signed Marcelinho (on loan) and Lenny Rodrigues on a permanent transfer.

The Nizams completed their foreigner’s quota by roping in Dutch midfielder Roland Alberg on loan from Roda JC.

The Gaurs have had a busy window this time as they have signed as many as four players and let go of Lenny Rodrigues.

The Highlanders’ only activity has been replacing injured forward Kwesi Appiah with Deshorn Brown who joined them after terminating his contract with Bengaluru.

The Blues have replaced striker Deshorn Brown with Spanish midfielder Xisco Hernandez who returned to the club after one and a half seasons.

Farukh Choudhary returned to Jamshedpur from Mumbai City as Jackichand Singh went the other way. They also signed Len Doungel on loan from FC Goa and Amarjit Singh went to the Gaurs on a permanent transfer.

Kerala Blasters replaced injured Spanish midfielder Sergio Cidoncha with his compatriot Juande. They also signed Subha Ghosh from ATK Mohun Bagan and had sent Nongdamba Naorem to the Mariners. It has to be noted though, that while the club announced Ghosh’s signing they are yet to receive clearance from Indian FA as the Mariners reportedly halted the move. The matter currently rests with the AIFF’s Player Status Committee

Just a week before the window opened, East Bengal had released as many as nine Indian players from their bio-bubble in Goa. They also signed Nigerian forward Bright Enobakhare who has impressed.

Despite being at the bottom of the league table, the Kalinga Warriors have been involved in very little transfer activity. In a swap loan deal with ATK Mohun Bagan, they have sent Marcelinho out and have brought in Australian midfielder Brad Inman. Full-back Rakesh Pradhan also joined the club on a permanent deal from NorthEast United