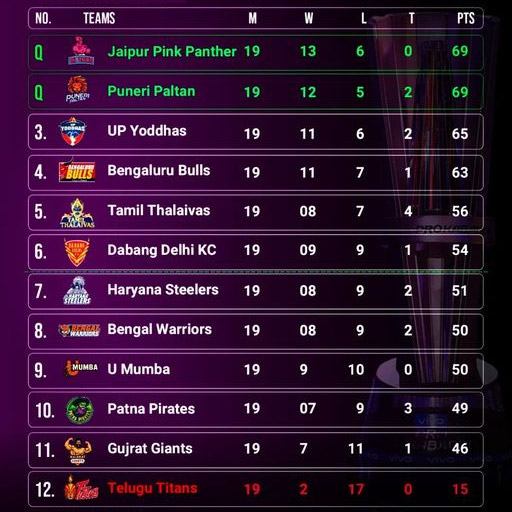 The Jaipur Pink Panthers and the Puneri Paltan have officially qualified for the Pro Kabaddi 2022 playoffs. The two teams managed the feat after the Haryana Steelers defeated the Bengal Warriors on Friday (December 2) night at the Gachibowli Indoor Stadium.

A Triple Panga took place in Pro Kabaddi 2022 on Friday. U Mumba battled against the UP Yoddhas, the Bengal Warriors locked horns with the Haryana Steelers and the Patna Pirates took on the Gujarat Giants.

Had U Mumba and the Warriors failed to win their respective matches, the Pink Panthers and the Paltan would have qualified for the playoffs. And that’s exactly how things turned out.

The UP Yoddhas beat U Mumba 38-28 and the Bengal Warriors lost 32-26 to the Haryana Steelers. Courtesy of those two results, the Puneri Paltan and the Jaipur Pink Panthers reserved their places in the next round.

The two teams will finish in the top six of the standings irrespective of what happens in their remaining three league-stage matches of the tournament.

Having qualified for the Pro Kabaddi 2022 playoffs, the Jaipur Pink Panthers and Puneri Paltan will now aim to gain direct entry into the semifinals. If they retain the top two spots in the points table until the final match of the league round, the two franchises will secure direct last-four spots.

Both franchises will be in action on Saturday (December 3) evening. Pune will take on Dabang Delhi KC in the first match of the Triple Panga, while Jaipur will square off against the Bengal Warriors.