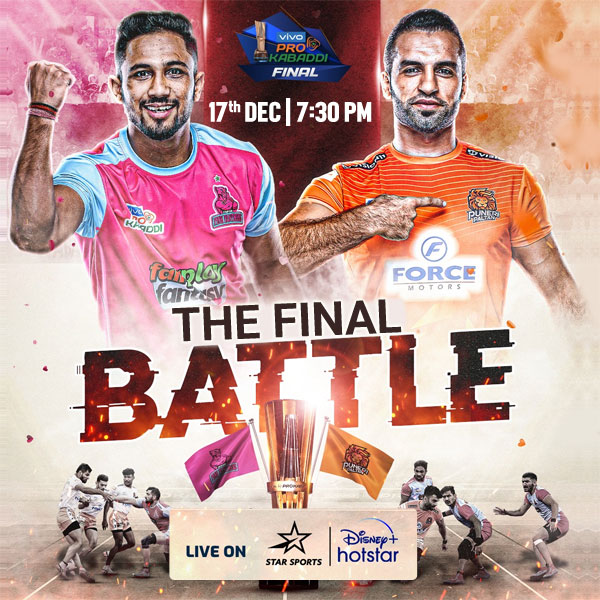 After 132 gruelling league stage games, two exhilarating eliminators and two blockbuster semi-finals, it all boils down to the final of vivo Pro Kabaddi Season 9 on Saturday between Jaipur Pink Panthers and Puneri Paltan at the Dome, NSCI SVP Stadium in Mumbai.

Here is our preview for the final.

Jaipur Pink Panthers will be making their third appearance in a vivo PKL final and will be eyeing their second title after winning the inaugural edition. The Panthers topped the league stage standings and have met Puneri Paltan twice this season, winning once and losing on the other occasion. They are in great form and will back themselves to beat Puneri Paltan in the final with their star man Arjun Deshwal (290 raid points) leading the way. V Ajith Kumar (94 raid points) who had a big impact for the Panthers in their semis win against Bengaluru Bulls will also have a role to play alongside Rahul Chaudhari (71 raid points). On the defensive front, Ankush has been the best defender of the season with 86 tackle points. He has received great support from Sunil Kumar (59 tackle points) and Sahul Kumar (53 tackle points).

Puneri Paltan, on the other hand, will be making their first appearance in a vivo PKL final after finishing second in the league stage and beating Tamil Thalaivas in the semi-final. One of the more consistent teams this season after a slow start, Puneri Paltan have seen contributions from most members in the team. In the absence of Aslam Inamdar (138 raid points) and Mohit Goyat (120 raid points) from the team, Akash Shinde (135 raid points) and Pankaj Mohite (51 raid points) have stepped up in recent matches and had a big impact in their semi-final win. In defence, captain Fazel Atrachali has led by example with 53 tackle points, while Sombir has chipped in with 35 tackle points. Sanket Sawant and Abinesh Nadarajan have also contributed 30 tackle points each, while Gaurav Khatri has amassed 18 tackle points. Another player who will have a role to play in both defence and offence is all-rounder Mohammad Nabibakhsh.

Jaipur Pink Panthers and Puneri Paltan squared off 20 times with the former winning on 10 occasions and the latter winning eight games. Two matches finished in ties.

Catch all the LIVE action from vivo Pro Kabaddi Season 9 on the Star Sports Network and LIVE streaming on Disney+Hotstar.