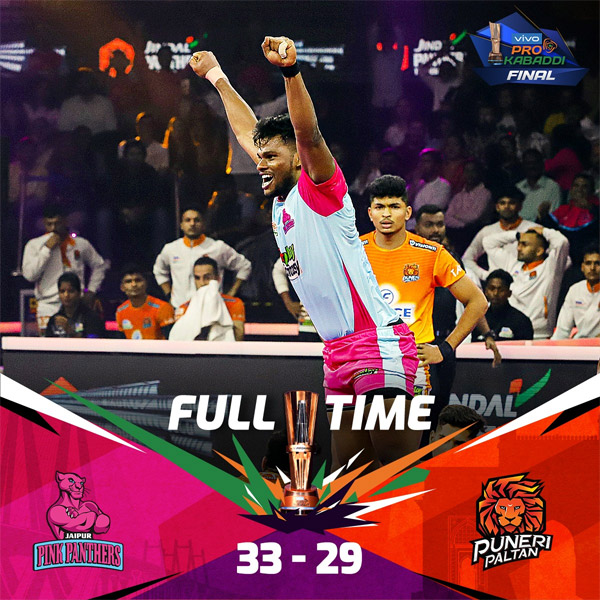 The Jaipur Pink Panthers on Saturday claimed their second Pro Kabaddi League title after beating Puneri Paltan 33-29 in a thrilling final at the NSCI Stadium in Mumbai. With the win, the Pink Panthers become only the second team, after three-time champions Patna Pirates, to win multiple titles.

Captain Sunil Kumar starred and led the Pink Panthers with six tackle points, which was the same number of points won by raiders V Ajith and Arjun Deshwal, who was later adjudged the ‘most valuable player’ of the season.

The match started close, with both teams matching each other in terms of points scored, until Ajith broke through the Pune defence towards the end of the first half. It was an effort that led the Pink Panthers to earn the only all-out of the match early in the second half.

From there on, the Jaipur-team did not give up the lead and continued to keep the young Pune team at bay before winning the trophy for the first time since they won the inaugural edition in 2014.

Pankaj Mohite pulled off a brilliant raid in the opening minutes of the match as the Puneri Paltan inched ahead at 3-1. However, the Jaipur side fought back and levelled the scores at 3-3. Gaurav Khatri tackled Arjun Deshwal and helped the Pune side regain the lead at 5-4 in the 9th minute.

Thereafter, V Ajith stepped up his game as Jaipur levelled the scores at 6-6. Both sides played out a neck and neck contest until Mohammad Nabibakhsh picked up a raid and a tackle point in quick succession and helped Pune take the lead at 10-8 in the 16th minute.

Ajith caught out Sanket Sawant and Gaurav Khatri to help Jaipur put their noses in front at 12-10 in the 19th minute. The Panthers managed to hold the lead at 14-12 at the stroke of half-time.

The Panthers tackled Aditya Shinde and inflicted an all out in the 22nd minute to take a substantial lead at 18-13. However, Akash Shinde pulled off a multi-point raid and Pune tackled Ajith soon after to get within touching distance of Jaipur’s score at 17-18. But Ankush tackled Akash Shinde and helped the Panthers extend their lead further. However, Aditya Shinde caught out Ankush and Sahul Kumar to keep Pune in the game at 20-23.

Jaipur’s Captain Sunil Kumar pulled off a couple of brilliant tackle points as the Panthers continued to stay in the lead at 27-22 in the 34th minute. Pune tackled Deshwal in the 38th minute and stayed in the contest at 25-29. Badal Singh tackled V Ajith and Aditya Shinde effected a raid, but Puneri still couldn’t find a way to level the scores as Jaipur led at 31-29 in the dying minutes of the game. The Panthers played their cards perfectly in the final seconds of the match and clinched their second Pro Kabaddi League title.