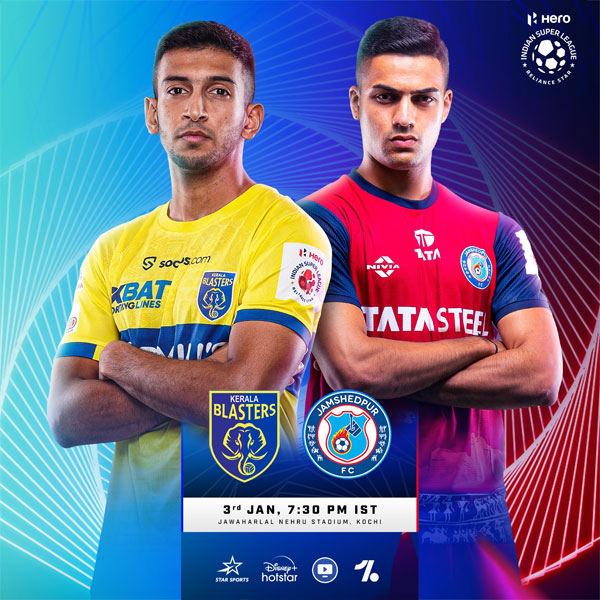 Both sides are heading into this tie on the back of fairly positive results. Kerala Blasters got a 1-0 win over Odisha FC, thanks to an 86th-minute winner from Sandeep Singh the last time they played, while Jamshedpur FC played a hard-fought 2-2 draw against an in-form FC Goa, which was their first point in seven games.

Kerala Blasters have had contributors from all over the park this season. Adrian Luna is looking sharp once again, with two goals and three assists. Ivan Kaliuzhnyi has scored four goals and one assist from central midfield. Dimitrios Diamantakos has done a fine job up-front, with five goals and two assists.

Kerala Blasters head coach Ivan Vukomanovic acknowledged that his team was in a good place heading into the new year in his pre-match press conference. “It’s true that we’re in a positive flow – positive momentum. Even last season – when we were in the bubble – we had a difficult start, we had one unbeaten line of 10 games or something like that. It’s very important – especially, in December and January, as a team, you stay in that positive momentum because that’s the most important part of the season,” he said.

Jamshedpur FC have been finding it hard to find the back of the net so far, and have scored just eight goals all season. Their head coach Aidy Boothroyd switched to a back-three in the match against FC Goa, and there was an improvement in performances from players across the board, although an 89th-minute goal from Iker Guarrotxena stopped them from getting all three points. It remains to be seen if Aidy Boothroyd will stick with this new formation and if it’ll be enough to take Jamshedpur FC to the knockout rounds.

Boothroyd also hinted that the club might add players to strengthen his squad in the January window during the pre-match press conference. “In terms of players coming in, we do need a couple more. I think when you lose your top goalscorer and top creator, it can be a problem,” he said.

The two sides have faced each other 13 times in the Hero Indian Super League. They’ve drawn seven times and won three games each. When the two sides met each other last month, Kerala Blasters won 1-0 thanks to Dimitrios Diamantikos’ 17th-minute strike.