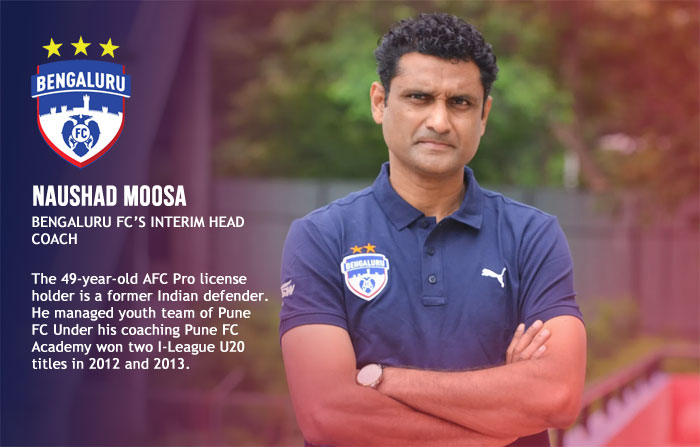 Indian Super League (ISL) outfit Bengaluru FC parted ways with head coach Carles Cuadrat on Wednesday. The club has stated that they are actively looking for a suitable replacement but for the time being, assistant coach Naushad Moosa will take over the reins. Incidentally, Moosa is also the head coach of the club’s reserve side as well as the head of youth development

The 49-year-old is a former Indian defender who played for East Bengal, Mahindra United and Mohammedan Sporting besides representing the national side between 1994 and 1998. Starting his career with the Kolkata giants, he was a part of the side that created history by beating J League outfit Verdy Kawasaki in the Asian Cup Winners Cup in 1997. He also played an important role in the club’s IFA Shield victory the same year, beating KBF-FC Kochi 3-2 in the final. It was towards the end of his spell at Mohammedan SC however, when he decided to take up coaching on the advice of then Mohammedan head coach Biswajit Bhattacharya.

After Godfrey Pereira resigned as head coach of Air India of the I-League, Moosa was signed to replace him in February 2013. His first match in charge took place on 3 March 2013 against ONGC. Despite Air India taking the lead in the 41st minute, ONGC came back to win 2–1. He would fail to get Air India a single victory during his short three months stint with the club as Air India eventually finished 13th, in the relegation zone, at the end of the season.

Moosa managed youth team of Pune F.C. Under his coaching Pune F.C. Academy won two I-League U20 titles in 2012 and 2013. He also led the team to Pune Football League title in 2016.

On 29 June 2017 it was announced that Moosa would join Bengaluru FC as assistant coach and head coach of the club’s reserve side. On 6 January 2021 after the sacking of Carles Cuadrat, Moosa became the interim head coach of Bengaluru