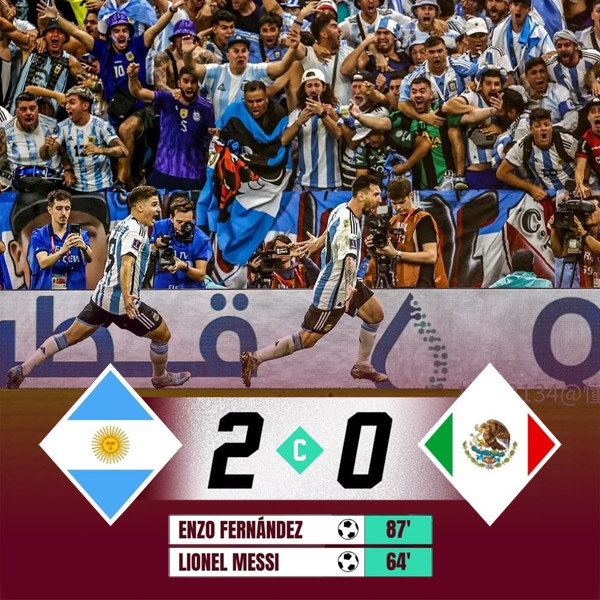 The masses draped in white and sky blue — Argentine supporters who have traveled great distances to bear witness to a possible third World Cup title in three weeks’ time — did not wait for the metro train to reach its terminus at Lusail Stadium on Saturday before starting the party.

Five hours before kickoff, they tied a long banner to the overhead handrails, creating a canopy for boarding passengers. Their songs honored Lionel Messi and the late Diego Maradona, and their uniformed hopping shook the car like a bounce house. Each stop collected new travelers, most wearing the gentle colors of Argentina or the bold green of its formidable foe, Mexico.

All World Cup matches are events. Argentina vs. Mexico, with Messi seeking to avoid an unfathomable group-stage exit for what he says is his final World Cup, with almost 90,000 in an otherworldly stadium? Now, that’s a spectacle.

It took until the second half for the match to live up to the moment, but when it did, pure Argentine bliss spilled into the night. Messi scored a wonderful goal, La Albiceleste struck again in gorgeous fashion, and after a stunning defeat against Saudi Arabia in its opener, Argentina was back on track with a 2-0 victory.

“We needed this euphoria,” Messi said. After the upset loss, “the days were very long, and we were eager to have the chance to turn it around. It was a critical game. [Winning] was a weight off our shoulders, and we now have peace of mind.”

The victory left Argentina with three points, even with Saudi Arabia and one behind Group C leader Poland. Mexico is stuck with one point entering Wednesday’s finales pitting Argentina vs. Poland and Saudi Arabia vs. Mexico. Two will advance to the round of 16, which has been Mexico’s tournament exit ramp the previous seven World Cups.

Argentina’s anxiety grew through the night. Possession was aplenty, but answers to unlocking the Mexican defense were not.

Then it happened, like a lightning bolt piercing the night and plunging through the giant oval opening above this stadium.

Mexico conceded too much space to Messi in a central position beyond the penalty area. Ángel Di Maria squared the ball to him. Before Hector Herrera could close, Messi unleashed a low, 25-yard shot with meticulous accuracy. Guillermo Ochoa dove to his left, his arm stretched to its limits. It was futile.

Quiet much of the match, Messi all but ended Mexico’s hopes.

“In 30 seconds, he can be very harmful,” Mexican Coach Gerardo Martino said.

Argentine Coach Lionel Scaloni said the first half “wasn’t good by either side. … In the second half, we started to play better. And then, well, you know what happened. Number 10 did what he does best.”