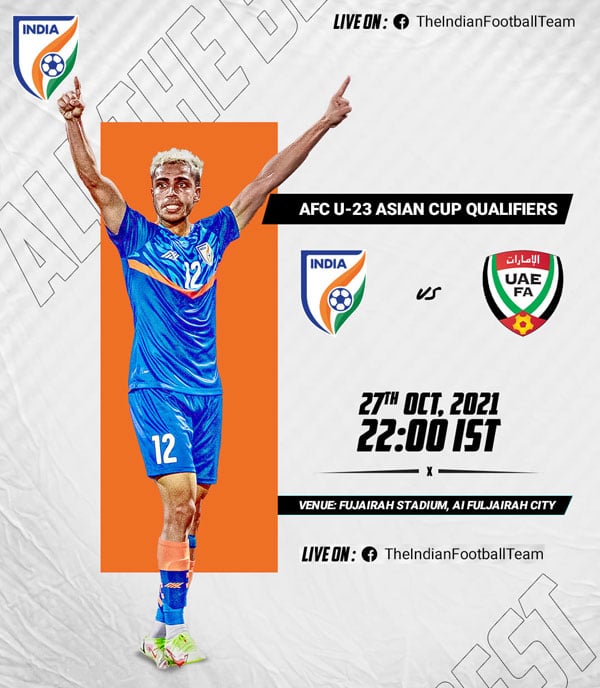 Fujairah City is a quiet place, some 120km from Dubai. From a distance, rocky mountains and barren landscapes strike you more than the few high rises. The locals inform that some 10 years back, there wasn’t anything here and that this is supposedly UAE’s next industrial town. “Another 10 years, and you won’t recognise this place,” the local manager smiled.

The morning prior to India U23’s next match against hosts UAE in the qualifiers for the AFC U-23 Asian Cup, the Blue Colts appear excited as ever, but are cautious – not to get complacent.

The back four and goalkeeper Dheeraj Singh were solid against Oman. But Dheeraj is quick to point out the pertinent lesson learned during the hard-earned victory.

“Our back four were in solid form. They were strong, winning tackles, winning aerial balls. They made my job easier. But we conceded in the last five minutes, and we need to bring in the extra concentration as the game progresses. It’s a big lesson we learned from the last game,” Dheeraj maintained.

And immediately, there are reminders about the result against Oman being a past tense by now. Midfielder Suresh Singh who captained the team the other day added: “Everyone looks happy as we have won our first game. But it’s not over. We have come here with a target, and we haven’t achieved it yet. We need to be humble, and prepare for our next game and do well in this competition.”

“It’s a nice feeling to start our campaign with a win. But we shouldn’t get carried away. We will make sure we stay humble and control our emotions as we prepare for the next one. And we know it’s going to be a very tough one against UAE,” Dheeraj, sitting next, expressed.

The camaraderie off the pitch, and the understanding on the pitch have been the most striking feature so far. “The exposure we got at the U-17 level, and the matches at Indian Arrows and U-19 platform made us confident. We have been together for a long time,” Suresh explained.

Even before he could end, Dheeraj took over. “We are getting together after four years. 70-80 percent of the players in this batch are from the FIFA U-17 World Cup squad. We grew up together living in the same dormitory, and hotel. Most of us spent more than 4-5 years together. So we have a good understanding, and know each other personally,” Dheeraj quipped.

“We are having a healthy atmosphere in our campaign. Everyone feels so comfortable being with the other. We have been playing against each other in the league for 2-3 years. Everyone is charged to use this opportunity in the way we could. We are loving and enjoying the campaign together as we always did.”

A striking feature in the past few has been dark passing clouds over Fujairah City. The local manager informed, “It can rain a bit. But it won’t stay for long.” It hasn’t rained yet. The boys, much aware that this is their last age-group Championship, sweat it out under the lights.”

The kick-off against UAE tomorrow, October 27 is at 10pm IST, and the match will be live streamed on Indian Football Team’s official Facebook handle.