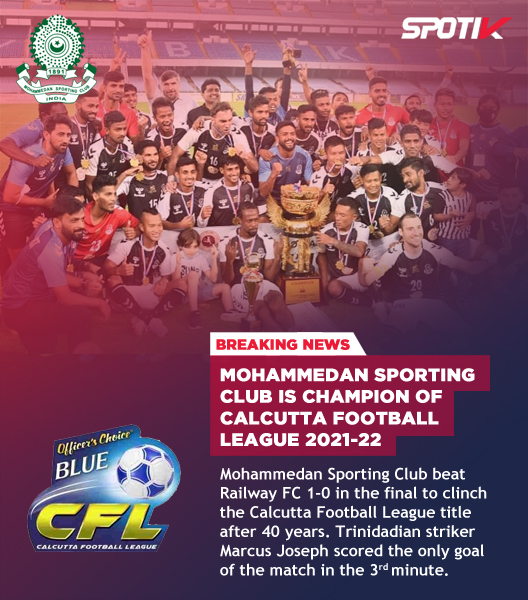 Mohammedan SC finally painted the Saltlake Stadium black and white on Thursday afternoon by winning the Calcutta Football League title. The black and white brigade had to wait for 40 long years until today to get their hands on the coveted trophy. It was 1981 when Mohammedan SC won the Calcutta League last time. And finally, the wait is over now for the Black Panthers. With today’s win, the black panther won their 12th Calcutta League title.

After having a break of more than a month in between the semi-final and the final, both Mohammedan SC and Railway FC looked a bit rusty throughout the whole match. Mohammedan SC’s fan-favorite and Trinidad striker Marcus Joseph managed to score the only goal of the match inside the first quarter. After that, no team made promising openings or chances towards the goal.

Darkhorse of the tournament, Railway FC had most of the ball possession but failed to get the final touch every time in front of the opponent’s goal. Railway FC’s winger Sukuram Sardar was again impressive down the wing. The game was mostly played in the central midfield and the wings with Railway FC seeing most of the ball. However, Mohammedan Sporting Club managed to hold on to their 1-0 lead till the final whistle was blown.

At the end of 90 minutes, the final whistle marked the start of celebrations in the Black and White camp. Both Kolkata heavyweights Mohun Bagan and SC East Bengal were missing from this year’s CFL. SC East Bengal didn’t even start forming their team and ATK Mohun Bagan showed their participation in the Asian stage as the reason for not participating in the century-old domestic competition.

So, in the absence of both the Kolkata Giants, Mohammedan SC had the pressure of winning the title as the only other giant. They had a huge fan expectation and luckily the Black panthers didn’t disappoint their faithful. Railway FC;

A season to remember for Railways

Talking about Railway FC, they were the least favorite team to even think about to play in the knockout stages at the start of the season. As the season aged, unexpected to many, Railway FC shined under the management of Souren Dutta. Defender Subhendu Mandi and Winger Sukuram Sardar have been star performers for the team on a consistent basis and both men were rewarded with Bengal call up for the upcoming Santosh Trophy.

Both the CFL finalists are set to play in the IFA shield starting from late November and changes in the squad are expected. It is now to be seen which player makes the cut to play in the second oldest tournament in India.