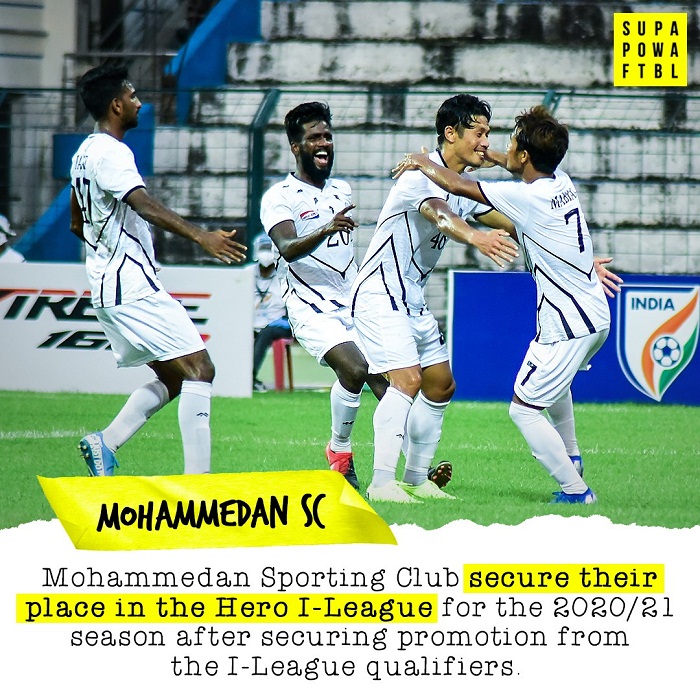 Mohammedan SC recorded a historic 2-0 victory over Bhawanipore FC at the Kalyani stadium today as they qualified for the I-League after seven long years. With both the teams having 6 points from 2 games coming into the match, the Black Panthers had to win today to ensure their passage into the I-League based on the head-to-head rule and the legacy club from Kolkata did not disappoint as goals from VanlalbiaaChhangte and Gani Ahmed Nigam secured a comfortable 2-0 win.

Mohammedan started strongly with Chhangte testing Bhawanipore goalie Shilton Paul as early as the third minute when he chested down a free-kick from SafiulRahaman and shot at goal, only for Shilton to make a fantastic save. Bhawanipore’s high defensive line was tested next by Willis Plaza who brought down SurajRawat’s long diagonal ball before laying it off for SK Faiaz. The diminutive midfielder left the ball for Firoj Ali whose shot took a wicked deflection and went just over Shilton Paul’s goal. Mohammedan, who just a couple of days back parted ways with head coach Yan Law, seemed unaffected by matters off the pitch as they kept on attacking the Bhawanipore centre-back duo of KingshukDebnath and MonotoshChakladar with aerial balls aimed towards Plaza and Chhangte’s well-timed runs beyond them.

The second half started with a card for Mohammedan centre-back Balwinder Singh as he up-ended Adjah, and the resultant free-kick from Anup was headed wide by Pankaj Moula. As time went by the match became a little more physical as players from both sides tried to rile each other up with a succession of cheap fouls. One such incident saw a coming together between SK Faiaz and Monotosh but the referee intervened before it developed into a full-blown fistfight. Finally, Mohammedan were rewarded for their perseverance after some smart play from a short free kick down the right allowed Safiul to deliver a dangerous cross into the box. Monotosh seemed favourite to deal with it but he got his attempted header all wrong and gift-wrapped the ball to substitute Gani Ahmed Nigam who put his shot through Shilton’s legs to score (2-0).

Bhawanipore had a very good chance to reduce the scoreline soon after when a fantastic cross from Avinabo Bag found substitute midfielder JitenMurmu inside the box. Murmu’s header across goal brought about a fine save from Priyant who dived to his right and somehow palmed the ball away. Sankarlal Chakraborty’s men tried extremely hard for the next few minutes to find the net with Murmu, Adjah and Altamash Sayed all coming close. However, they never quite got the final pass right. At the stroke of full time, Mohammedan had another opportunity to seal the deal when another cross from Safiul down the right hand channel found Nepal U-22 prospect Abhishek Rijal who rose highest but failed to keep his header on target. Nonetheless, it was enough for Mohammedan as they saw out the final few minutes, albeit with some time wasting and concession of a few fouls of their own (23 in total).

The result will come as a big boost for Mohammedan, who were in all honesty the favourites to win this tournament but had been dealing with a certain amount of negativity behind the scenes. However, the fact that they reached their objective with one match still left to play proves that this is a capable squad that should do well once the I-League kicks off in December. It remains to be seen how the club moves on from here as they try to bring back the glory days to the black and white side of Kolkata maidan.