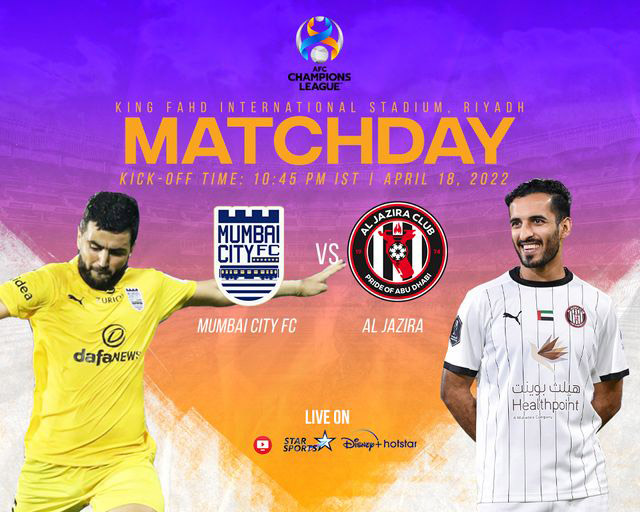 It’s matchday 4 in Group B of the 2022 AFC Champions League and the first of the reverse fixtures are upon us. Mumbai City prepare to face UAE’s Al Jazira at the King Fahd International Stadium tonight as action kicks off at 8:15 PM AST (10:45PM IST).

The Islanders stepped out four days ago to face the defending UAE Pro League champions Al Jazira and while Des Buckingham’s side gave a performance for the ages, especially in the second half, the result wasn’t meant to be for one reason or another.

The first half saw the Islanders being very uncharacteristic of the style they have championed all season. Mumbai City allowed the home side on the night plenty of space and possession in the first 45 minutes as the Islanders sat back and invited pressure. With minutes to go for halftime, the Emiratis were presented with a chance from the spot after Mehtab was adjudged to have handled the ball in the box by referee Kim Jong Hyeok. Al Jazira’s Ali Mabkhout stepped up to take the penalty and although Mohammad Nawaz got a palm to it, it was Mabkhout’s fortune that it went past the Islanders’ keeper. Just seconds after the restart, Diego Maurício’s marauding run was halted as he was pulled back and brought down in the box but to the bewilderment of everyone present in the stadium, the Korean referee deemed it to be an act of simulation and even booked Diego in the process.

The Islanders returned in the second half a side transformed. Des Buckingham’s side mounted attack after attack in the search of only the second win in the AFC Champions League by an Indian club. Rahul Bheke, the hero from matchday 2, launched an array of crosses from right back and on occasion even hit the crossbar from an extraordinary attempt from distance. With nearly 10 minutes to go, Vikram Partap was brought down in the box after a defender from the Emirati side seemingly went in with his knee into the 19-year old’s back but the Korean referee, once again, chose to ignore appeals for a penalty from the Islanders. In the final chance of the night, both Raynier Fernandes and Mourtada Fall failed to connect with the ball in a melee in the penalty box as Al Jazira claimed a 1-0 win on a night when things could’ve gone differently.

Des Buckingham: The players have now tasted this level of competition on three occasions and we have the prospect of playing against the same three teams and it’s one that we’re really looking forward to.

Vikram Partap Singh: Having played against all the teams now, we know what we have to do to improve our performances against them. We’ve had a good rest after the last game and we’re ready.