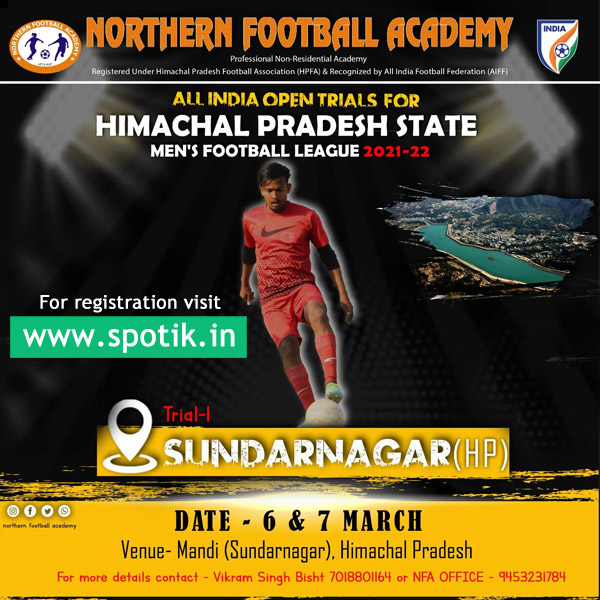 Come, show your talent, impress our selectors & be a part of Northern Football Academy which is going to participate in Himachal Pradesh State Men Football League 2021-22. & I-League (2nd Div.) if qualifies

Time & Ground (Venue) – Will be intimated to you personally after the complete submission of google registration form with fee.

Details about the trial:

1. Registration Fee (Rs 300 per player + Complete Submission of Google Form) is compulsory for appearing in selection trial. Without registration fee your form will be invalid.

2. Any player from any part of the country can take part in the selection trial.

3. One can pay the fee via (NFA online Barcode ) GPAY, PHONE PAY, PAY TM, BANK TRANSFER (No Cash is acceptable at any case)

4. During the trials food & accommodation will be borne by the player itself.

5. A player can appear for selection trials in more than one city if he is not satisfied or confident with his performance.

6. Each player has to bring original ADHAAR CARD, DATE OF BIRTH CERTIFICATE BY NAGAR NIGAM or MUNICIPAL CORPORATION & TWO PASSPORT SIZE PIC. & complete football match playing kit along with her during trial.

7. Those players who have their AIFF CRS ID if selected will be taken official transfer via AIFF to our Academy. The transfer fee will be borne by us.

8. The player himself will be responsible for any injury occurred & the expenses.

9. After selection in the team or while during any tour the responsibility of the injury occurred during match or training will be borne by the academy.

10. Northern Football Academy reserves the right for the selection of players according to merit & requirement of the team.

12. Carry your Mask, Sanitizer, Water Bottle along with you.