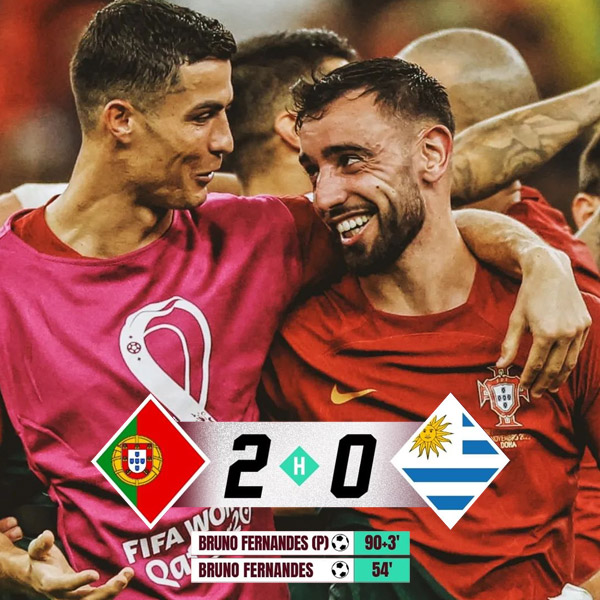 Bruno Fernandes scored a pair of goals as Portugal beat Uruguay 2-0 to move to six points in Group H at Lusail Iconic Stadium in Qatar on Monday night and clinch a spot in the knockout rounds.

Portugal survived a hectic finish to the game to become the third team after France and Brazil to qualify for the last 16 and will finish group play against South Korea on Friday.

Portugal dominated with close to 70% possession against Uruguay in a scoreless first half, but it was the South Americans who came closest to scoring when Rodrigo Bentancur charged through only to see his 32nd minute shot blocked by keeper Diogo Costa.

Cristiano Ronaldo set the tone for the match with some early showboating when he used a shoulder to redirect a long throw into the path of William Carvalho, whose powerful volley sailed over the bar.

Portugal looked threatening on the approach but struggled to create goal scoring chances, with Bernardo Silva, Fernandes and Joao Felix frustrated in front of goal early on.

Fernandes scored from the left flank in the 54th minute with a whipped in cross-shot that Ronaldo appeared to have redirected into net past Uruguay goalkeeper Sergio Rochet. However, on closer inspection the goal, originally given to Ronaldo, was credited to his former Manchester United teammate Fernandes.

The match was briefly interrupted shortly after the goal when a protester carrying a pride flag entered the pitch before being chased down and led away by security staff.

Uruguay battled to get back on level terms and nearly did through substitute Maxi Gomez’s curling shot from the top of the penalty area in the 75th minute, but with Costa beaten it impossibly came back off the post.

Portugal, who were knocked out of the 2018 World Cup by Uruguay, then put the game out of reach just before full-time when VAR awarded them a questionable penalty and Fernandes calmly converted from the spot for his second of the night.

It was the third time at a World Cup that Portugal won two successive group-stage matches, the previous two times leading to runs into the semifinals.

The result leaves Uruguay in a difficult position in third on one point, and will have to beat Ghana in their final group game to have a chance of progressing.