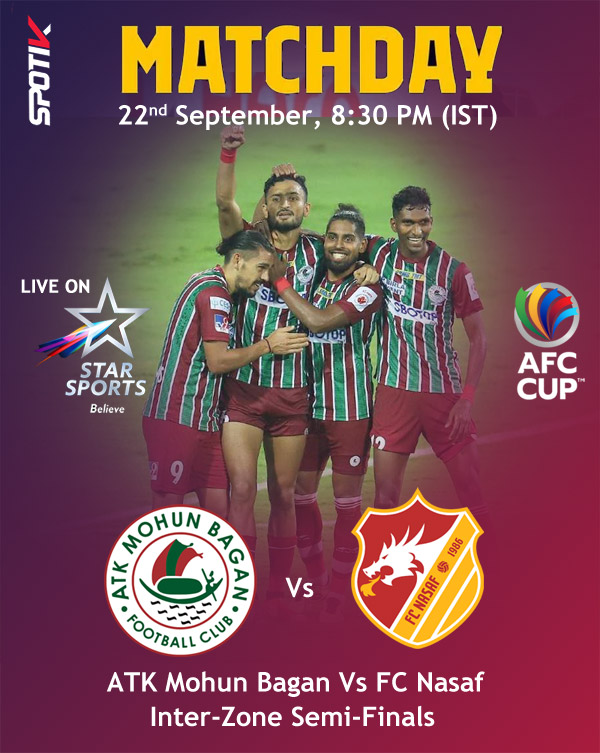 The Mariners will miss the services of Tiri and Hugo Boumous, while Joni Kauko may get his debut.

Carrying the hopes of the entire Indian football fraternity, ATK Mohun Bagan face Uzbekistan side FC Nasaf in the AFC Cup inter-zone playoff semi-finals. The Mariners are the only remaining Indian side in Asian competition. They will hence be hoping to go far into the AFC Cup this time around.

In FC Nasaf, they face a side that has the experience of having won this competition in the past. The runners-up of last season’s Uzbekistan Super League, the Dragons are a force to be reckoned with. Despite their topsy-turvy form in the domestic circuit this season, FC Nasaf still have enough firepower to torment Antonio Habas’ side.

It’s safe to say that if ATK Mohun Bagan are to progress past this round, they’ll have to produce their absolute best performance and must outwit FC Nasaf in the daunting clash on Wednesday.

FC Nasaf are arguably the favourites to win this one. They have superior experience of excelling in the knockout rounds and have, of course, won the competition in the past. That being said, a lot is also riding on this one for Nasaf’s own campaign.

The Dragons are currently fourth in the Uzbekistan Super League table. They look unlikely to win any major silverware this season. As a result, the AFC Cup can be their biggest shot at a reputed trophy. They’re definitely taking it seriously, having had a perfect group stage, in which they won all three games without conceding a goal.

Nasaf will not underestimate the threat posed by the Indian Super League (ISL) giants ATKMB and would respect their ability. They’ll aim to use their superior technical skills and physical prowess to get a dominant win over the Mariners.

The ultimate goal for the ATK Mohun Bagan hierarchy is clear – to make the team one of the best in Asia. To gain that reputation, they have to excel in Asian competitions. The Mariners have fought hard to get where they are now. Backing out now is just not an option.

ATKMB carry the ambitions of the majority of Indian football with them. If somehow able to win the AFC Cup, the Mariners could ensure the berth of two Indian teams in the AFC Champions League next season. However, that is still a distant dream. Habas’ side must fend away their immediate danger.

ATK Mohun Bagan don’t have as much experience as FC Nasaf and are probably lacking in overall quality too. It’ll definitely be difficult for them to oust the Uzbekistan giants in this one. However, the Mariners must showcase more hunger and passion to get the win.

They’ll have to work their socks off and match every single step of FC Nasaf’s to get the best out of them. Getting knocked out after coming so far can be extremely disappointing. As a result, the Mariners will be desperate to get the win.

FC Nasaf don’t have any injury problems for this one. However, they’re only likely to play with 2-3 foreign players.

The big miss for ATKMB in this one will be Hugo Boumous, who missed their training camp because of injury. As a result, it’ll be interesting to see how Joni Kauko, who is part of the squad, performs if he gets his debut. Prabir Das and Michael Soosairaj have also travelled, which perhaps indicates the two could feature in this one.

Having had a short period with Delhi Dynamos in the ISL in the past, Andrija Kaludjerovic has a bit of experience of how to succeed against Indian teams. The 34-year-old Serbian striker has been in impressive form in cup matches at FC Nasaf since joining the club. He scored an important goal in their win over FK Ahal in their last AFC Cup game. Kaludjerovic has three goals in two cup appearances for Nasaf and will hope to maintain that this season.

The Serbian striker’s towering presence and physical prowess can help him really trouble defenders. Kaludjerovic doesn’t need many chances to score, with his clutch finishing ability making him a big threat for this one. As FC Nasaf aim for many goals, as long as they’re able to feed the big Serbian striker, they should be able to cause real problems for the ATKMB defenders.

The man for the biggest occasions at ATK Mohun Bagan is their star forward Roy Krishna. The Fijian striker has the quality to terrorize any team in the AFC Cup and has to be at his sharpest yet, against FC Nasaf. Krishna’s clever off-the-ball movement, hold-up play and link-up ability can help the Marines create some definitive chances.

The striker will hope to get better delivery in the final third to make good use of his finishing ability. However, Krishna’s main role in this one will be to help the Mariners orchestrate quality chances, get the ball forward quickly and occupying the defenders’ attentions to help free up his teammates in the final third.

The match will kick off at 8:30 pm IST on September 22, 2021, at the Maldives National Football Stadium. The match will be telecast on the Star Sports Network and be streamed live on Hotstar and Jio TV as well.